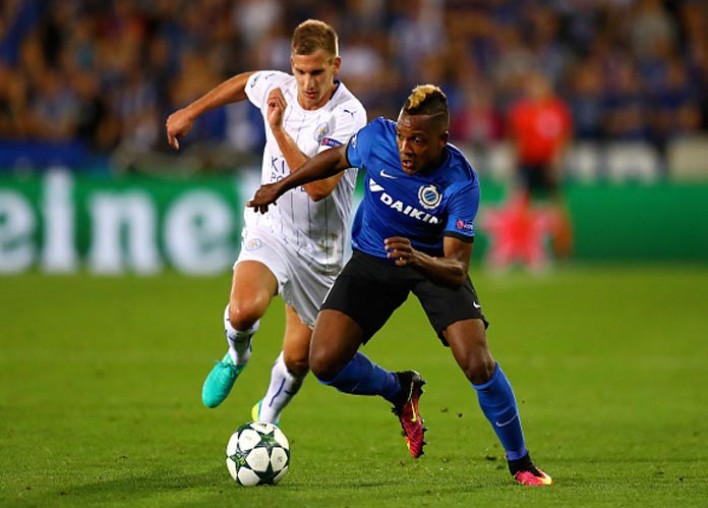 Leicester manager Claudio Ranieri had warned against expecting another perfect victory, but his side delivered nonetheless, scoring twice in the first 30 minutes.

Albrighton’s goal came just five minutes in, after Brugge’s goalkeeper, Ludovic Butelle, attempted to catch the ball in mid-air. Luis Hernandez had tossed in a long throw from the right and Albrighton was hanging by the far post when Hans Vanaken inadvertently flicked the ball into Albrighton’s path.

It was the type of goal that showed why the Belgian team had lost three of their opening six games in the Jupiter Pro League and a reminder Leicester had been placed in a very convenient group.

In the 29th minute, Brugge captain Timmy Simons was booked for knocking down Jamie Vardy on the edge of the box after he lost the ball.

Mahrez got his second goal and pushed the score to 3-0 in the 62nd minute with a penalty, which was awarded after Vardy was again taken down, this time by Butelle.

Mahrez had failed to score on three of his last four penalty kicks, which led Ranieri to consider having Islam Slimani take it, but Mahrez struck it with decisiveness and power.

“If he doesn’t score I take the neck and crush the neck,” Ranieri joked.

Ranieri also added that the Champions League music brought out the best in the 25-year-old Algerian.

“Maybe the music woke him up,” Ranieri suggested.

Slimani, another Algerian who plays as a striker, made his debut with Leicester Wednesday after being bought for £29m from Sporting Lisbon. The forward played aggressively, to the point where he was booked for an unnecessary push on Bjorn Engels that saw the defender substituted due to what looked like a serious shoulder injury.

Leicester are now at the top of Group G, given that Porto and Copenhagen tied 1-1.

Just two minutes in, Club Brugge began to play aggressively, as Abdoulay Diaby skipped through Danny Drinkwater’s dive and slipped in Jose Izquierdo, but the forward’s finish was dreadful and he paid three minutes later when Albrighton netted the first goal.

A few minutes before halftime, Drinkwater came close to scoring by kicking a strong, left-footed volley that was dipping below the crossbar until Butelle tipped it over for a corner.

Diaby also took a shot that hit the post at one point.

Leicester, who are ranked 16h in the Premier League, will next host Burnley FC on Saturday.