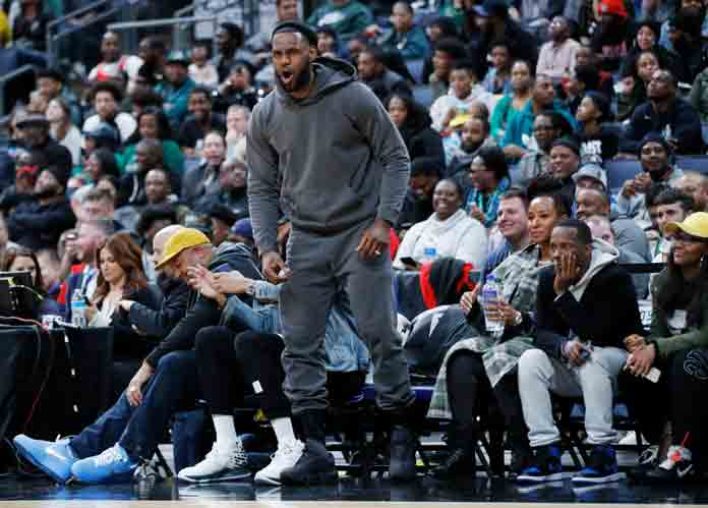 LeBron James was in attendance to watch his son, Bronny James, hit the go-ahead shot for his team, the Sierra Canyon Trailblazers. The Trailblazers defeated LeBron’s alma mater St. Vincent-St. Mary Irish by a final of 59-56 on Saturday.

LeBron is St. Vincent-St. Mary’s most notable alum, having led them to three state titles in four years.

Sitting courtside of Nationwide Arena in Ohio, LeBron cheered on his son as he and Sierra Canyon go 8-0.

It was understood that Bronny would have gone to St. Vincent-St. Mary’s had LeBron stayed in Ohio. Now, Bronny sits on the same team as Dwayne Wade‘s son as they chase a title.

Despite cheering for Sierra Canyon, LeBron has done a lot for his old high school. Aside from putting them on the map some 20 years ago, he has donated $2 million to the school, renovated the gym and has written a $250,000 check for athletes and band members’ uniforms.

LeBron said, “Seeing my son out playing in our home state versus my alma mater, playing in front of our family and friends, everyone was telling me it was like I was back in high school all over again watching my son. It was one of the greatest moments in my life so far.”

The family man knows that hard work and his career are just pieces of his life. “Being in the NBA is extra credit as far as life [goes]. If you’re able to make it, you don’t ever take it for granted. This is all cool and well and dandy, but there’s so much more to life, especially when you’re raising a family.”

“It’s not promised that my son can make it to this level.”

LeBron James on if he and Bronny will be the first father-son pairing to play in the NBA at the same time. pic.twitter.com/5PHd4mkgcd