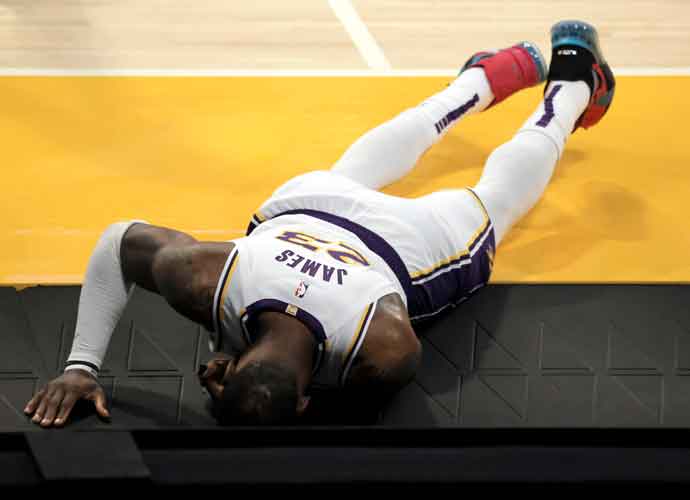 LOS ANGELES, CALIFORNIA - MARCH 20: LeBron James #23 of the Los Angeles Lakers reacts to an apparent injury during the second period of a game against the Atlanta Hawks at Staples Center on March 20, 2021 in Los Angeles, California. NOTE TO USER: User expressly acknowledges and agrees that, by downloading and or using this photograph, User is consenting to the terms and conditions of the Getty Images License Agreement. (Photo by Michael Owens/Getty Images)

Los Angeles Lakers star LeBron James will miss the next two games, which is not good for a Lakers team that is surprisingly fighting for playoff positioning.

James recently returned for Los Angeles after missing 20 games due to a high ankle sprain. James was in his second game since returning against the Toronto Raptors on Monday night. Unfortunately, the four-time MVP was forced to leave because of soreness in his right ankle. It was the same ankle that he had the high ankle sprain that sidelined him for some time.

The Lakers star missed Tuesday’s game against the Denver Nuggets and is expected to miss the team’s next two games as well. It is expected that the superstar will miss the team’s games against the Los Angeles Clippers on Thursday and the Portland Trail Blazers on Friday. James could miss more games, but the team will be re-evaluating him for the next few days.

For the Lakers, it becomes a tough road from here on out. The defending champions were competing for the top spot in the Western Conference early in the season until injuries to Anthony Davis and James derailed chances at finishing at the top of the standings. The team lost Davis, then James to injury, and the team faltered to sixth in the West. Los Angeles hoped that once their All-Stars returned that they would be saved, but they got another setback with James out again.

On Tuesday night, the team was able to defeat the Nikola Jokić-led Nuggets. It was an important win for the Lakers, who are looking to avoid the play-ins. Los Angeles must hold onto their sixth spot in the Western Conference to avoid the play-in tournament, but the issue is that Portland is only one game behind them. The Lakers have to win the next two games, especially their game against Portland. Doing so would further the team’s chances to stay in the sixth spot in the conference standings.

It would be quite a story if the Lakers fell to the seventh seed and had to participate in the play-in tournament, especially after James recently blasted the NBA’s new format.