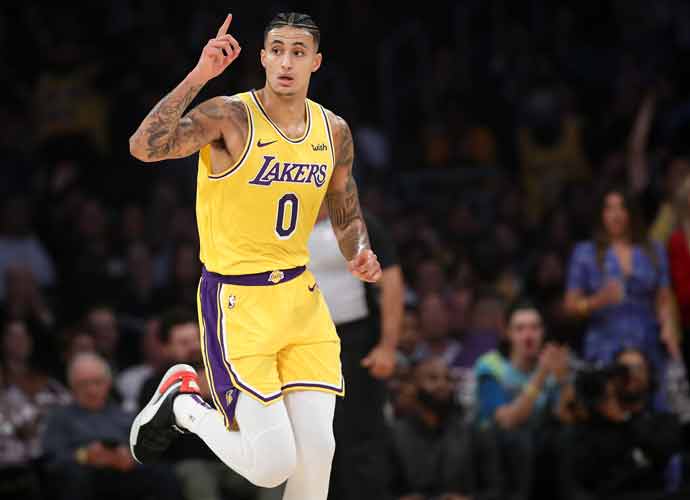 LOS ANGELES, CALIFORNIA - NOVEMBER 19: Kyle Kuzma #0 of the Los Angeles Lakers reacts after making a three point shot during the first half of a game against the Oklahoma City Thunder at Staples Center on November 19, 2019 in Los Angeles, California

Kyle Kuzma has been taking advantage of the NBA Preseason to show off his improved skills.

The Los Angeles Lakers forward has been putting in the work and so far, averaging 22 points, four rebounds and four assists in 36 minutes. Not only are his numbers impressive, but so has been his three-point shooting. The 25-year-old is shooting 47.6% from beyond the arc compared to last season when he shot the three-ball with 32%.

Kuzma credits his improvement to practicing during the offseason after the team won the NBA championship. “I just got up a lot of threes during the short offseason,” he said. “I’m just trying to figure out my role, and one thing I can add that Frank said in my exit meeting was being able to shoot off the move.”

Last season, the 25-year-old role changed from starter to coming off the bench. Off the bench, he averaged 12.8 points off 25 minutes. One recurring issue last season was Kuzma’s lack of defense. Luckily, this preseason the forward is showing improvements as he is playing better defense.

His improvement has not gone unnoticed as both coach Frank Vogel and All-Star teammate Anthony Davis have praised him. “The thing that sticks out is how hard he works,” Vogel said. “He’s playing with confidence, he’s really not forcing any action, he’s getting his shots in the rhythm of the offense.”

Davis said, “He’s making the right plays, reading the defenses a lot better — even from last year. He developed his shot tremendously from last year to this year, just in the summertime grinding.”

Kuzma’s improvement in skills comes at a great time when his role is going to be expanded when the regular season starts. Both Vogel and Davis have commented about his duties expanding. First, Vogel dropped hints as he said, “He’s a big part of what we’re going to do this year.” Davis reinforced that statement, “It’s going to be a big year for him. He’s going to play a bigger role for us this year.”

As his role will be expanded, the Lakers are looking to keep him with a contract extension. The team has engaged in talks with the forward’s representatives for an extension. However, both sides have not come to an agreement, just yet. Kuzma is eligible to become a restricted free agent if he does not reach a contract extension agreement. It becomes the best of both worlds for Kuzma because his improvement will allow him to not only get a bigger role with the Lakers but a bigger contract with the team or another in free agency.

Read more about:
basketball Los Angles Lakers NBA Sports
Listen to the uInterview Podcast!
Get the most-revealing celebrity conversations with the uInterview podcast!