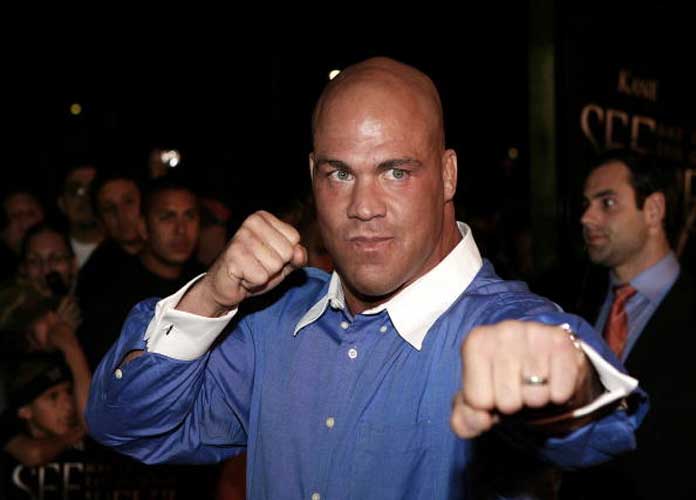 ORANGE, CA - MAY 08: Wrestler Kurt Angle arrives at the Lions Gate Premiere of 'See No Evil' at the Century Stadium Promenade 25 on May 8, 2006 in Orange, California. (Photo by Michael Buckner/Getty Images)

Kurt Angle To Headline WWE Hall Of Fame Class Of 2017

Kurt Angle To Headline WWE Hall Of Fame Class Of 2017

Angle learned the news Monday afternoon. The 48-year-old will be inducted during a ceremony on Friday, March 31, as part of the WrestleMania 33 weekend festivities at the Amway Center in Orlando, Florida.

“I was shocked. I’ve been out of WWE for a long time and out of touch with them, so I didn’t really expect this,” Angle– who also won two NCAA Division I national championships during his time at Clarion University– told ESPN.com. “It’s a huge honor. This is the only Hall of Fame that I’m not in and probably [the one] I want to be in the most. This is the one that means the most for me. I had a lot of fun entertaining the fans for seven years with WWE, and I’m glad that my hard work paid off.”

Indeed, the news will also surely surprise dozens of pro wrestling fans, given that Angle spent 10 years with rival Total Nonstop Action Wrestling (TNA) after requesting his release from WWE in 2006. His post-WWE career was filled with legal issues and well-documented problems with substance abuse, although he’s been clean for the last three years.

When asked to describe his relationship with WWE executives Vince McMahon and Paul “Triple H” Levesque over the last decade, Angle chucked before stating, “There wasn’t one.” Angle added, however, that their breakup was mutual, and said he briefly spoke with Levesque last May, when talks began for an eventual reunion of some type with the company.

“It was one of those things where, when I left WWE, it wasn’t on bad terms,” Angle said. “It was just that I couldn’t do anything for them anymore because I was banged up and they couldn’t do anything more for me. I never felt ill will against them. It wasn’t like a nasty parting, it was just our time is up. You go your way, and I’ll go mine.”

Angle said the first phone call he planned to make upon hearing the news of his induction was to his old friend, Hall of Famer “Stone Cold” Steve Austin.

“Steve and I have been up and down the road together. We had a lot of fun, and he is the one guy I have always kept in touch with,” Angle said. “He taught me a lot about wrestling and he taught me how to be funny. I’ll never forget that. He is a good friend.”

Angle confesses he struggled to watch the current WWE product in recent years, not knowing whether he would one day return. Although his WWE contract runs through the Hall of Fame ceremony, Angle stated Monday that his new deal does not include a WrestleMania match.

Angle took off most of 2016 from active wrestling, except for a few independent dates, in order to spend time with his wife Giovanna, who gave birth to their third child in November. When asked, however, how much longer he thinks he can wrestle as he approaches 50, the former star chuckled heartily.

“Almost entirely full [tank],” Angle said. “The thing is — I can still go. I think I have proven that in the other company [TNA] up until the day I retired. But that’s not important to me anymore. I have a beautiful wife and five kids. I’m spending a lot of time with them.

“I took this year off and enjoyed it thoroughly; almost too much, to the point where I was thinking maybe I’m not going to go back anywhere. But I really believe that the contract with WWE, whether I wrestle or not — and there aren’t any guarantees either way — I feel like being an ambassador to the company is the most important thing for them and for me right now.”

Angle also added that if he had the opportunity to choose who to fight in his last match, that he would likely choose AJ Styles or Seth Rollins.

Angle captured just about every major title with the company and is regarded by many of his peers as the quickest learner they have ever seen, going from novice to prime time in record time.

ORANGE, CA – MAY 08: Wrestler Kurt Angle arrives at the Lions Gate Premiere of ‘See No Evil’ at the Century Stadium Promenade 25 on May 8, 2006 in Orange, California. (Photo by Michael Buckner/Getty Images)