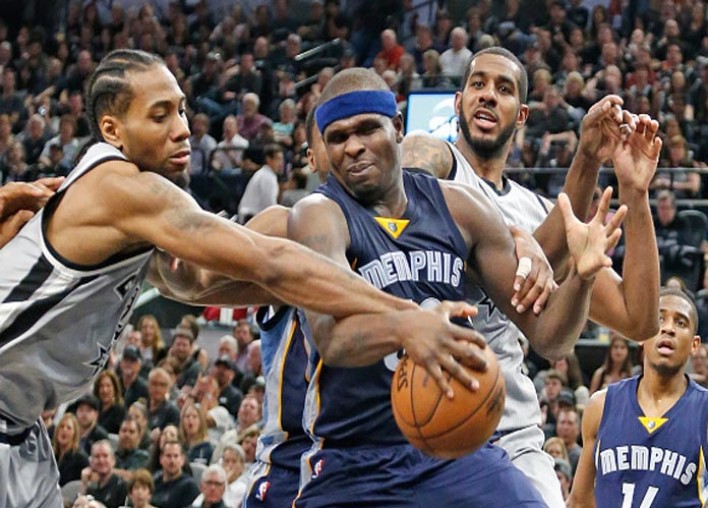 SAN ANTONIO, TX - APRIL 17: Kawhi Leonard #2 of the San Antonio Spurs tries to strip Zach Randolph #50 of the Memphis Grizzlies of the ball in Game One of the Western Conference Quarterfinals during the 2016 NBA Playoffs at AT&T Center on April 17, 2016 in San Antonio, Texas.

Kawhi Leonard scored 20 points to lead the San Antonio Spurs to a blowout 106-74 home victory over the Memphis Grizzlies on Sunday night in Game 1 of the Western Conference first-round series, thus handing the Grizzlies their worst postseason loss.

The Spurs had 13 steals and nine blocks, and Leonard finished with four steals and three blocks.

“He’s just aggressive,” said Vince Carter, who led Memphis with 16 points. “He’s in passing lanes, he has great on-ball instincts, great hands and he blocks shots very well at his position as well. So, even if he gets beat, he can recover. He has very long arms. He’s just relentless, and he really gets their defense started.”

Leonard attacked from the tipoff, stripping the ball from Matt Barnes on the Grizzlies’ opening possession and turning the steal into a breakaway dunk.

“I got some easy shots going into that transition, getting some layups and dunks,” Leonard said. “That’s how you get in rhythm, for my teammates as well. If they’re able to get an easy layup, they’re just going to gain more confidence.”

LaMarcus Aldridge added 17 points and Tony Parker added 15 points and six assists for San Antonio. The Spurs sat their starters in the fourth quarter in order to rest them for Game 2 on Tuesday night in San Antonio.

The Spurs outscored the Grizzlies 33-14 in the third quarter to break open what had up until then been a relatively close game.

Memphis matched a postseason low in the first quarter with 13 points, and only Xavier Munford’s 15-foot jumper with 46.1 seconds left prevented it from matching the worst output ever in any quarter.

Zach Randolph was held to six points on 3-for-13 shooting.

“Kawhi’s a very good defender, and he takes great pride in it,” San Antonio coach Gregg Popovich said. “He did what he usually does for us. It’s important. He sets the tone for us defensively, and tonight was a good example of that.”

The Grizzlies’ last largest postseason losing margin was 27 points against the Oklahoma City Thunder on May 11, 2011.

Despite missing starters Pao Gasol and Mike Conley, Memphis tried to keep the game close in the first half, but the Spurs closed the half on a 9-0 run leading into the third quarter, which they also dominated.

“It just takes a little while to get going,” Duncan said. “Whatever you want to call it. Playoff jitters. It just took us a quarter or two to get our rhythm going. We got it going defensively. We were solid the whole way through and then some shots started falling. We kind of extended that lead. I think just giving ourselves a quarter or two to get ourselves rolling.”

SAN ANTONIO, TX – APRIL 17: Kawhi Leonard #2 of the San Antonio Spurs tries to strip Zach Randolph #50 of the Memphis Grizzlies of the ball in Game One of the Western Conference Quarterfinals during the 2016 NBA Playoffs at AT&T Center on April 17, 2016 in San Antonio, Texas.