Kansas Fights Back To Win NCAA Title Over UNC - uSports.org 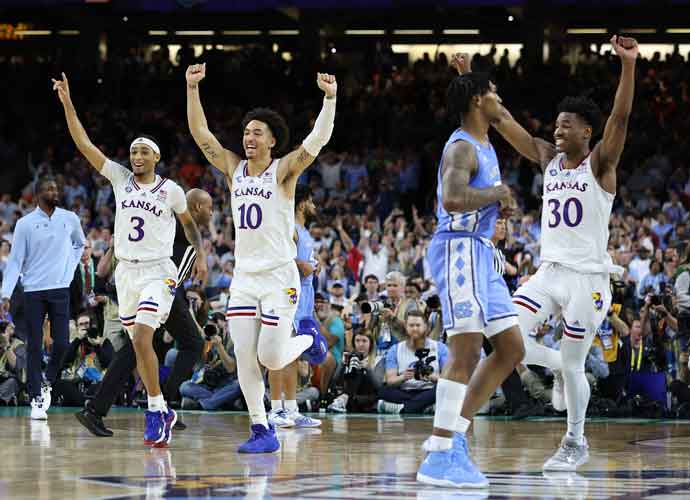 Don’t judge a book by its cover—and don’t judge a college basketball game by its halftime score.

You would know that if you watched the NCAA title game Monday night, as Kansas erased a 15-point halftime deficit to claim its fourth men’s basketball championship with a 72-69 victory over North Carolina.

The Jayhawks trailed by as many 16—the largest deficit a championship team has ever faced—but David McCormack led the team back and hit two crucial shots for Kansas’ first title since 2008.

The Tar Heels jumped out to a 40-25 lead at the break, even though one dummy predicted they’d come out flat (though he did have the correct outcome!). And he was sort of right in that KU had an early 9-3 lead, but UNC pulled away in the first frame.

It was familiar territory for Kansas, as the school was down nine points with just over two minutes left to shock Memphis in that ’08 title game. It showed.

McCormack’s dunk on the Jayhawks’ first possession of the second half ignited the team, and an eventual 12-1 run made it a one-point game.

Four UNC turnovers in the first eight minutes of the second stanza didn’t help the Tar Heels’ cause.

The Tar Heels knotted things up at 57 on a Puff Johnson—who had eight total points in the previous four games—three with 8:17 left. He wound up leaving the game late after vomiting on the court.

“My whole thing this whole year has been just to stay ready whenever your number is called,” said Johnson. “I can honestly just say that I gave it everything I had.”

The teams traded buckets and McCormack’s bucket with 1:21 remaining gave Kansas a 70-69 lead.

On the Tar Heels’ next possession, Armando Bacot looked to drive past McCormack but slipped and had to exit. Another McCormack basket with 22 ticks left made up the final score.

UNC had a few final three-pointers to no avail.

Five Jayhawks recorded double figures, with two getting double-doubles: McCormack had 15 points and 10 rebounds, and Christian Braun had 12 and 12.

Five UNC players recorded double figures, with three garnering double-doubles. Bacot had 15 and 15 rebounds; Brady Manek had 13 and 13; R.J. Davis had 15 and 12.

Read more about:
Kansas Jayhawks NCAA Basketball University of North Carolina
Listen to the uInterview Podcast!
Get the most-revealing celebrity conversations with the uInterview podcast!