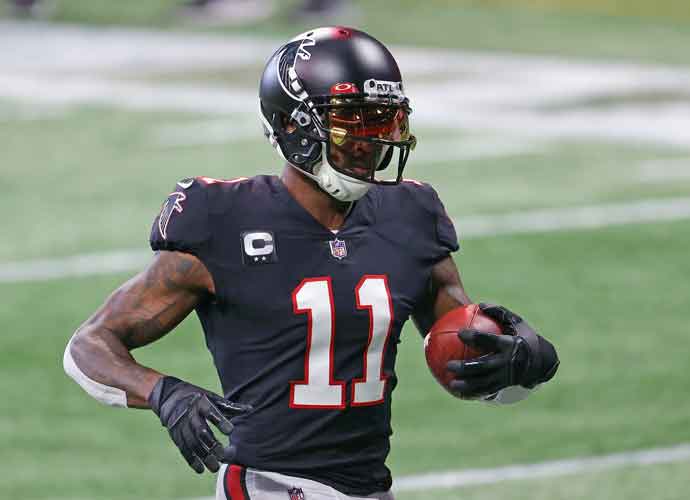 ATLANTA, GEORGIA - DECEMBER 06: Julio Jones #11 of the Atlanta Falcons warms-up prior to the game against the New Orleans Saints at Mercedes-Benz Stadium on December 06, 2020 in Atlanta, Georgia. (Photo by Kevin C. Cox/Getty Images)

In a massive move, the Atlanta Falcons will be trading Julio Jones to the Tennessee Titans. Jones has spent his entire career with the Falcons since entering the NFL after his standout collegiate career at the University of Alabama. The Titans were considered a likely destination as Jones had been seen training with star Titans running back Derrick Henry. NFL Network reporter Ian Rapoport provided details on the move.

Sources: The #Falcons are trading All-Pro WR Julio Jones to the #Titans in exchange for at least a 2nd round pick. A blockbuster for Tennessee, who now gets the coveted big-play threat. And Atlanta ends up with very nice value.

“Sources: The Falcons are trading All-Pro WR Julio Jones to the Titans in exchange for at least a 2nd round pick. A blockbuster for Tennesee, who now gets the coveted big-play threat. And Atlanta ends up with very nice value.”

On Sunday, the deal was finalized. The Falcons received a 2022 second-round pick and a 2023 fourth-round pick in exchange for Jones. Many players from around the league reacted to the massive trade on social media.

National Recruiter of the Year walking into work on Monday. 🏆 @1kalwaysopen_ pic.twitter.com/pxzqBRRKBb

Because of you, 11 will always mean more. pic.twitter.com/SJQaT4URNX

This trade is a massive loss to the Falcons and marks the end of an era for the team. On the other hand, the Titans are receiving a playmaker that catapults them into being favorites in the AFC heading into the 2021 season. With other offensive weapons like Henry and AJ Brown, the Titans are poised to be a massive threat in the conference.