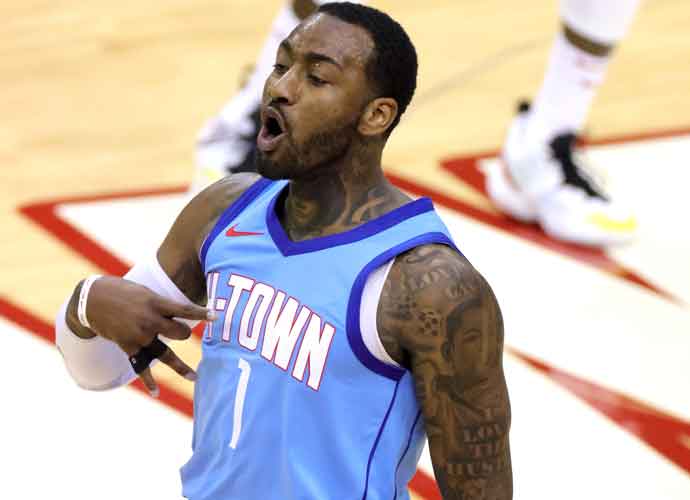 HOUSTON, TEXAS - JANUARY 26: John Wall #1 of the Houston Rockets reacts after making a three point basket during the fourth quarter of a game against the Washington Wizards at Toyota Center on January 26, 2021 in Houston, Texas. (Photo by Carmen Mandato/Getty Images)

The rich just got richer in the NBA. It is reported that Houston Rockets guard John Wall will join the Los Angles Clippers after clearing waivers. Earlier this week, Wall decided to opt-in to the final year of his contract which would have netted him $47.4 million. In buyout negotiations, however, Wall elected to take $6.3 million less to become a free agent. The Rockets reportedly wanted to grant Wall an agreement before the start of free agency on Thursday in order to provide him with more flexibility in choosing a new team.

Wall was traded to Houston in 2020 with a first-round pick for Russell Westbrook after the Rockets’ failures in the 2020 NBA Playoffs. Wall had been sidelined the majority of the previous two seasons due to a torn Achilles and heel surgery. The former number one pick had spent the first 11 years of his NBA career with the Wizards before the eventual trade.

Wall averaged 20.6 points and 6.9 assists in the 40 games that he suited up for Houston, however, he and the team reached a mutual agreement to sit out the 2021-22 NBA season to prioritize the playing time and development of young players such as Jalen Green, Josh Christopher and Kevin Porter Jr.

Wall’s addition to the Clippers immediately puts them at championship contender status. Wall is an above-average defender who can facilitate. Along with two-way stars in Paul George and Kawhi Leonard, the Clippers now have three legitimate pieces that can secure them a championship. Role players such as Terrence Mann, Marcus Morris, and most notably Reggie Jackson, who averaged 16.8 points and 4.8 assists as the team’s starting point guard, give L.A. the depth to compete with some of the other stalwarts in the Western Conference.

The Clippers went 42-40 last season with Leonard and George missing a majority of the regular season. They were eliminated by the Minnesota Timberwolves and New Orleans Pelicans in back-to-back play-in games for the postseason.