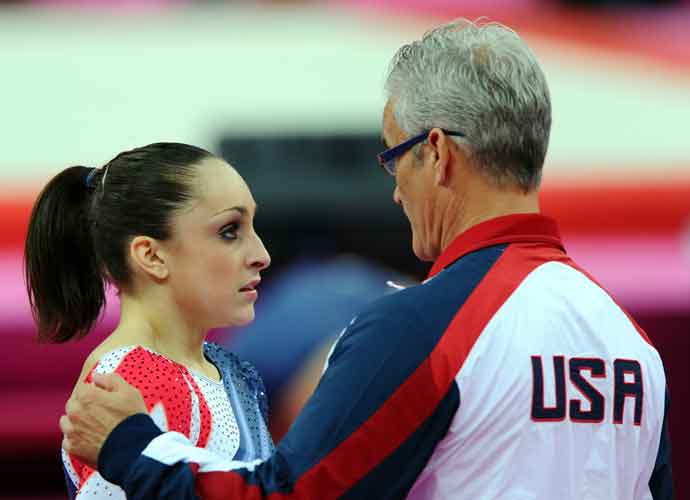 LONDON, ENGLAND - AUGUST 07: Jordyn Wieber of the United States of America reacts with her coach John Geddert after competing in the Artistic Gymnastics Women's Floor Exercise final on Day 11 of the London 2012 Olympic Games at North Greenwich Arena on August 7, 2012 in London, England. (Photo by Michael Regan/Getty Images)

This comes as the latest prosecution in the fallout of the sentencing of Larry Nassar, the former Team USA doctor who was found to have been sexually abusing his patients for decades. Geddert, former coach of the USA Olympic team, worked very closely with Nassar, and is believed to have helped cover up Nassar’s crimes. Geddert formally owned Twistars USA Gymnastics in Dimondale, Michigan, where many women say they were sexually assaulted by Nassar in the back room. Geddert’s relationship with Nassar dates back to the 1980s, when Geddert owned Great Lakes Gymnastics Club in Lansing, Michigan, and Nassar, not a licensed physician at the time, would sexually assault minor gymnasts on the training table.

Geddert was known for having an abusive coaching style, both physically and mentally. He used fear as a weapon and often did not put the health of his athletes first. His style allowed Nassar to get away with his actions because gymnasts did not feel they could approach him with their concerns about how they were being treated.

Geddert was at the helm of the 2012 national team at the London Olympics and continued to enable Nassar to abuse America’s top gymnasts on their international trips. Geddert was suspended by USA Gymnastics following Nassar’s sentencing in 2018, and announced his retirement from coaching a few days later. He also sold Twistars USA a few weeks ago.

These events come as just the latest part of the movement to atone for the years of abuse suffered by American gymnasts, primarily at the hands of Nassar and Geddert.

Michigan Attorney General Dana Nessel said that Geddert’s suicide was “a tragic end to a tragic story for everyone involved.”