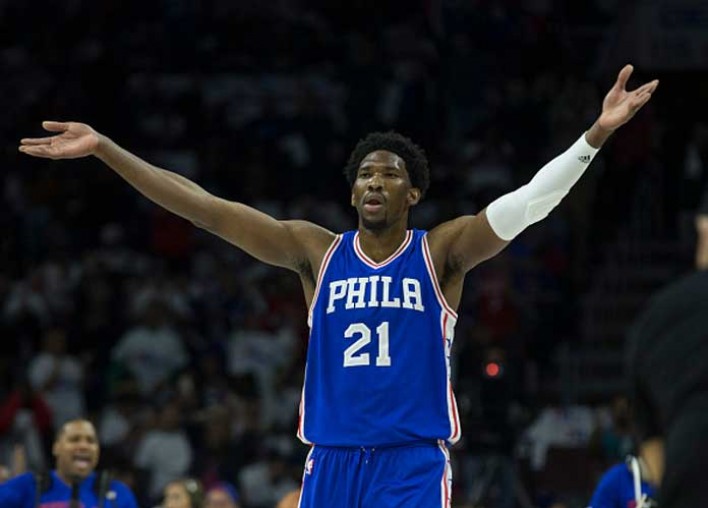 The Sixers hosted the Nets Thursday without point guard Ben Simmons who sat out with back tightness following 30 minutes of action during Sunday’s NBA All-Star Game. No problem. Joel Embiid was available and ready to prove why he’s one of the most dominant players in the league.

Embiid had his way in the paint against Brooklyn, scoring 39 points and grabbing 16 rebounds while shooting 50% from the field. Following his exceptional performance he was asked if his style of play from the All-Star game translated to Thursday’s victory.

“For sure,” Embiid told ESPN. “The All-Star Game was fun. Being there in the fourth quarter, doing my thing at the end of the game, I thought it was great. But the All-Star Game, just proving I’m here, I belong, and being the best player in the world, I just intend to keep coming out every single night and just play hard and trying to get wins and just go out and try to win a championship.”

The Sixers started the first quarter with a 22-6 run just hours after the Nets received word that Kyrie Irving had undergone season-ending shoulder surgery. Brooklyn was able to battle back going on a miraculous 44-8 run from 5:45 in the first quarter until there was three minutes left in the second. After a Nets’ timeout, the boo birds came out as the crowd’s frustration with the Sixers’ effort couldn’t be held in any longer.

“[I was] really just trying to find answers to some of the problems,” Sixers coach Brett Brown told the media after the game. The Sixers ran their offense through Embiid for a majority of the second half and saw glimpses of what transpired All-Star weekend when he continuously used his size advantage to back down defenders in the paint.

Late in the fourth quarter with the Nets leading 101-95, the Sixers were able to go on an 8-2 run to close out the fourth quarter including four free throws made by Embiid to send the game to overtime. The Sixers’ stifling defense held the Nets to just one point in overtime and the team plans to ride this momentum into Saturday’s matchup with the 1st place Bucks.

“I felt like the first part of the season I was trying to make sure everybody was comfortable, tried to take a step back,” Embiid said. “But if we are going to go somewhere, I’ve got to be one of the guys [doing it].”