Jimmy Vesey Signs Two-Year $1.6 Million Contract Extension – Why It's a Bargain For The Rangers - uSports.org 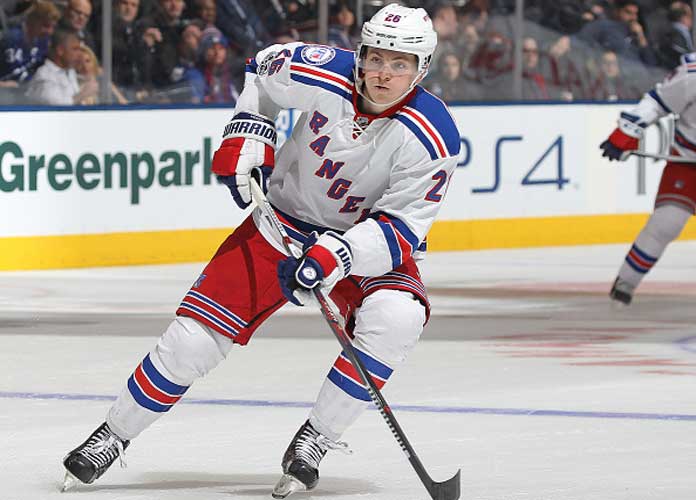 TORONTO, ON - JANUARY 19: Jimmy Vesey #26 of the New York Rangers skates against the Toronto Maple Leafs during an NHL game at the Air Canada Centre on January 19, 2017 in Toronto, Ontario, Canada. The Rangers defeated the Maple Leafs 5-2. (Photo by Claus Andersen/Getty Images)

The New York Rangers have agreed to terms with Jimmy Vesey on a contract extension and there isn’t much downside for the original six franchise here.

Ahead of training camp, the Rangers gave the 29-year-old a professional tryout (PTO) to see how he would fit in with the team.

Vesey wound up making a strong impression and earned himself a one-year $800,000 contract for this season.

After seeing him appear in dozens of games this year, the Rangers decided to enter negotiations to keep Vesey around a little longer.

Both sides agreed on a two-year extension that’s reportedly worth $1.6 million or $800,000 each year, which came to fruition quickly.

“It’s nice to have stability. The last few summers have been stressful for me; not having a contract and waiting around.”

In 39 games this season, Vesey has posted six goals and seven assists for 13 points total.

But above all, his underlying metrics have stood out.

While Vesey is mostly recognized as a bottom-six player, he has shown that he’s capable of driving play.

Vesey ranks third on the team in expected goals at 56.71%, according to Natural Stat Trick.

Many analytical charts point to Vesey being a defensive stalwart and a strong penalty killer including one from JFreshHockey.

Jimmy Vesey, signed to a 2x$0.8M extension by NYR, is a defensive fourth-liner and penalty killing winger. #NYR pic.twitter.com/q0RVSPKLPA

And plus, Vesey is making the league minimum this year and slightly above that in each of the next two seasons.

So there is not much risk associated for the Rangers if he does not perform well.

If that happens, the team could bury him in the minors and it would not have much impact on the $82.5 million salary cap, which will likely continue to rise over the next two years.

But if Vesey continues to play the way he has, this will look like an absolute steal of a contract for the Rangers.

The former Hobey Baker winner in college hockey first started his career with the Rangers after opting for free agency and choosing not to sign with his draft team, the Nashville Predators.

But now he’s back with the organization and has been a different player.

‘Slow’ Movie Review: Sundance Winner Is An Interesting Deep Dive Into The Nature of Asexuality