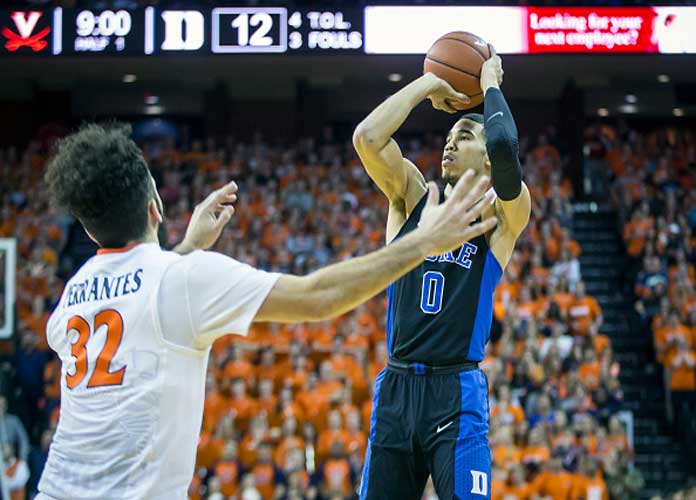 CHARLOTTESVILLE, VA - FEBRUARY 15: Jayson Tatum #0 of the Duke Blue Devils shoots a basket over London Perrantes #32 of the Virginia Cavaliers during a game at John Paul Jones Arena on February 15, 2017 in Charlottesville, Virginia. (Photo by Chet Strange/Getty Images)

Jayson Tatum scored a game-high 28 points to help lead the 12th-ranked Duke Blue Devils to a 65-55 road victory over the No. 14 Virginia Cavaliers on Wednesday night.

Tatum– a former No. 2 overall pick– scored 21 of his points in the second half, and was 6-of-7 on 3-pointers. The Devils freshman forward is shooting under 32 percent from three on the season.

Fueled by a sellout crowd at John Paul Jones Arena, Virginia took a 9-2 lead early in the game.

In the second half, Blue Devils coach Mike Krzyzewski said he simplified the offense by letting his players create chances for themselves.

“If we don’t hold the ball, if we move it, we’ll create openings where we don’t have to run plays; they can make plays,” Krzyzewski said. “That’s what we were doing in the second half. We were just trying to move the ball and give them an opportunity to be basketball players.”

The game also marked the third consecutive contest where Duke had a leading scorer reach 25 points or more. Allen, who scored just five points against the Cavaliers– his second-lowest total of the season– praised Tatum for his sharp shooting skills.

“It’s a nice luxury to have,” said Allen. “We all know Jayson is very capable of that. When we saw him hit the first couple, we just kept going back to him. I told him if it’s below 10 [seconds on the shot clock], you better come get the ball from me.”

Kennard finished with 16 points and was the only other Duke player to score in double digits. Krzyzewski had told Tatum he was playing with too much hesitation when he got the ball.

“Coach told me to shoot our bullets when we’re open,” Tatum said. “Coach was on me about that today, and I think that got me going. Just shooting when I was open.”

The Cavaliers next travel to Chapel Hill, N.C. to play No. 8 North Carolina on Saturday night for College GameDay.

CHARLOTTESVILLE, VA – FEBRUARY 15: Jayson Tatum #0 of the Duke Blue Devils shoots a basket over London Perrantes #32 of the Virginia Cavaliers during a game at John Paul Jones Arena on February 15, 2017 in Charlottesville, Virginia. (Photo by Chet Strange/Getty Images)