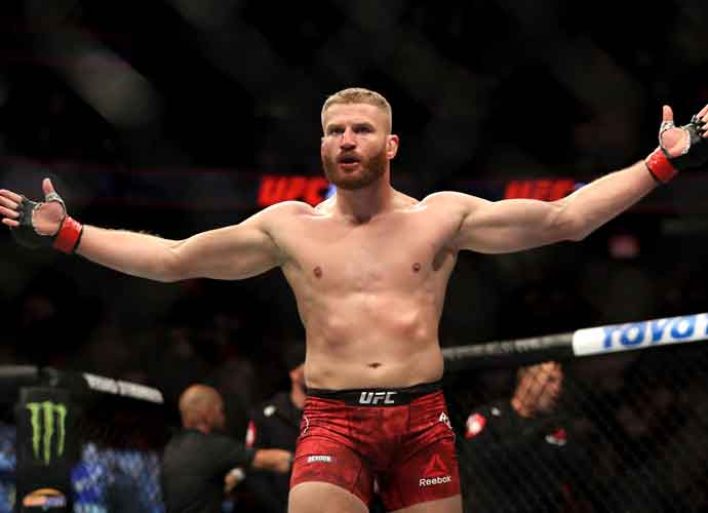 LAS VEGAS, NEVADA - JULY 06: Jan Blachowicz of Poland looks on after defeating Luke Rockhold of the United States by TKO in their UFC 239 Light Heavyweight bout at T-Mobile Arena on July 06, 2019 in Las Vegas,

With a potential shot at the UFC heavyweight title against champion Jon Jones, Jan Blachowicz needed to make some noise in his fight against Corey Anderson.

And that he did.

Blachowicz (26-8) delivered a devastating right hand to Anderson (13-5) in the first round of the contest at UFC Fight Night at Santa Ana Star Center. With this knockout, Blachowicz recorded the 16th finish in his professional career.

The Polish fighter now had seven recorded finishes in the first round, but this being his biggest. After a perfectly timed right to Anderson’s chin, followed by a hammerstrike to the already downed fighter, the fight was over before it seemed to begin.

Jones (26-1) was front and center at the fight and stood on his chair as Blachowicz shouted from the Octagon.

Jones seemed willing to entertain a fight against Blachowicz.

“I thought he looked tremendous,” Jones said. “Crisp boxing, good takedown defense. I’m happy to see Corey Anderson eat his words, he’s been talking so much trash. …Jan has great knockout power, he’s very technical. His fundamentals are very sharp. I could totally see the UFC matching us up with each other.”

Saturday’s fight was a rematch that saw Anderson win via unanimous decision. Anderson, who looked good in the opening moments of the fight, seemed caught by Blachowicz who cautiously waited for the moment to land a knockout blow, snapping Anderson’s four-fight win streak.