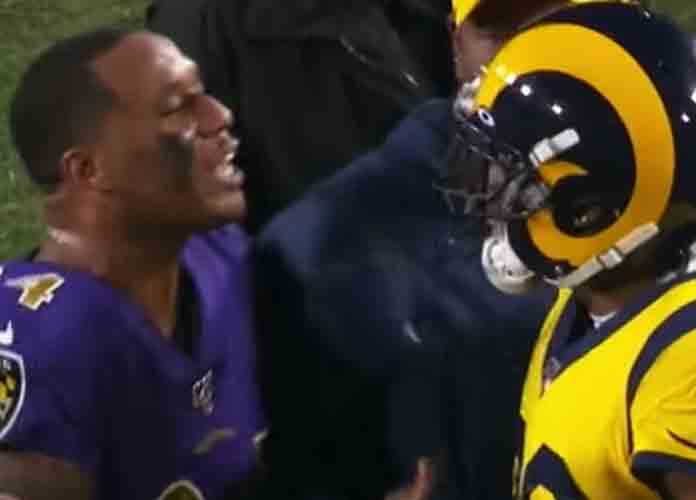 For many players, coaches and spectators alike, the Baltimore Ravens‘ 45-6 thrashing of the Los Angeles Rams on Monday night ended after four quarters. However, this was evidently not the case for cornerbacks Jalen Ramsey and Marcus Peters.

After the game, Peters embraced Rams staff member Jacques McClendon and Rams approached him shortly afterwards. Though it remains unclear who initiated the altercation, both players quickly began shouting at each other. Peters — who was not wearing a helmet — was seen directing an expletive in Ramsey’s direction.

Marcus Peters barking at Jalen Ramsey after the gamepic.twitter.com/jnvlgvIWMZ

Following the tirade, Ramsey had to be restrained by team personnel the entire way off of the field, and appeared afterwards to be waiting for Peters in the tunnel by the locker room; Peters exited the field minutes after, shirtless and reportedly shouting about how they had knocked Ramsey’s team out of the playoffs the previous year, a reference to the Ravens beating the Rams and hurting their playoff chances.

After tensions appeared to settle down, neither player went out of his way to comment on the argument.

“If you’ve got questions about the game, I’ll answer that,” Ramsey told reporters. “Other than that, I ain’t going to answer no B.S.”

Rams running back Todd Gurley offered his thoughts on the performance of former teammate Peters after the game.

“He wanted to come in and get this win like you always do when you go back home,” Judon told reporters. “For him to get that pick late in the game really killed everything. They had a little momentum, were getting first downs, and Pete came up with that huge pick. He’s going to let you know about it. We love that guy in the locker room.”

Although there is not much that is clear about the beginning of the altercation, what is clear is how the Ravens picked apart the Rams en route to a sizable victory.

The Ravens, led by quarterback Lamar Jackson, have recently been hot. Baltimore sits atop the AFC North at 9-2 after a seven-game win streak.