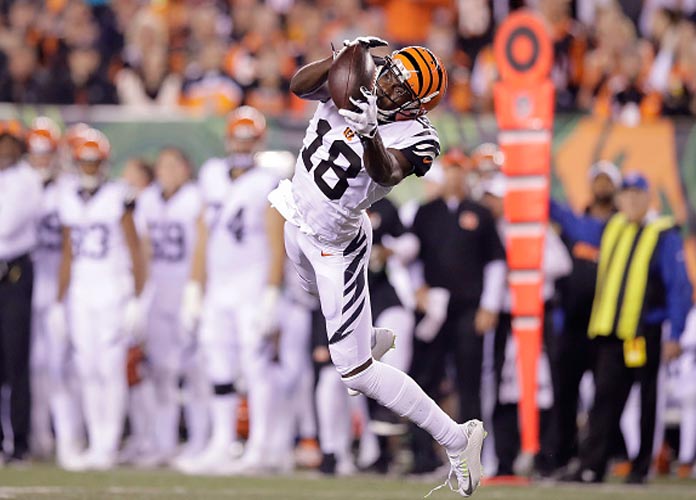 CINCINNATI, OH - SEPTEMBER 29: A.J. Green #18 of the Cincinnati Bengals catches a pass during the second quarter of the game against the Miami Dolphins at Paul Brown Stadium on September 29, 2016 in Cincinnati, Ohio. (Photo by Andy Lyons/Getty Images)

Cincinnati Bengals receiver A.J. Green followed a disappointing game with a strong one — finishing with 173 yards and a touchdown —to lead his team to a 22-7 home victory over the Miami Dolphins on Thursday night.

The Bengals (3-1) bounced back from a 29-17 home loss to the Broncos on Sunday with a powerful game against a worn-out team.

Green led the offense, beating the Dolphins (1-3) on every type of route. During the first three quarters, he recorded 166 yards on catches while Miami had 152 total yards. Cincinnati’s season-long issue of stalling out near the goal line forced the team to settle for Mike Nugent’s season-high five field goals. Green even made an incredible 51-yard catch along the sidelines in the first quarter–after quarterback Andy Dalton found himself scrambling– following the game’s first few stalled offensive possessions. The wideout capped off the drive with a TD reception to put the Bengals up 10-7 early on.

Green also had a 43-yard catch that set up another field goal in the third quarter for a 19-7 lead. He finished with 10 catches.

Bengals linebacker Vontaze Burfict marked his return with a strong game, leading the Cincinnati defense. The volatile player was suspended by the NFL for the season’s first three games due to his illegal hits. Burfict received a loud ovation from the crowd when he ran onto the field during introductions wearing a baseball cap. He knocked down a pass and recorded three tackles.

The Bengals will next visit the Dallas Cowboys on Sunday, Oct. 9, while the Dolphins will host the Tennessee Titans that same day.

CINCINNATI, OH – SEPTEMBER 29: A.J. Green #18 of the Cincinnati Bengals catches a pass during the second quarter of the game against the Miami Dolphins at Paul Brown Stadium on September 29, 2016 in Cincinnati, Ohio. (Photo by Andy Lyons/Getty Images)