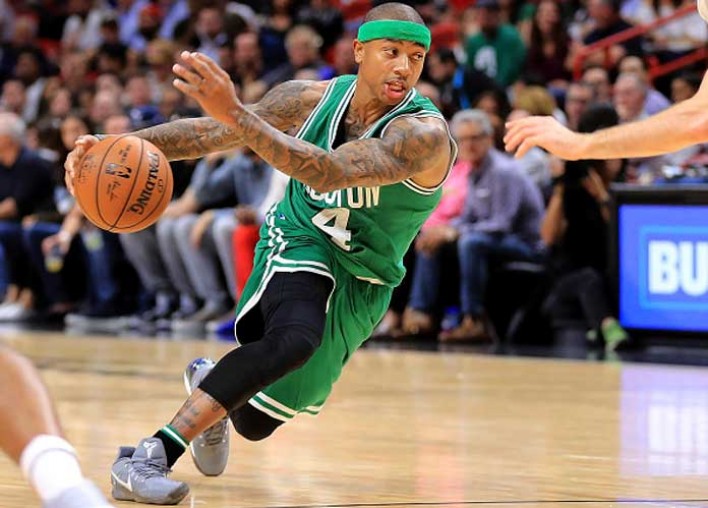 MIAMI, FL - NOVEMBER 28: Isaiah Thomas #4 of the Boston Celtics drives to the basket during a game against the Miami Heat at American Airlines Arena on November 28, 2016 in Miami, Florida.

The Boston Celtics played a terrible first half against the Memphis Grizzlies at FedEx Forum on Tuesday night, but luckily Isaiah Thomas came in to save the day.

Thomas helped the Celtics overcome a 17-point second-half deficit en route to a 112-109 overtime road victory over the Grizzlies.

The 27-year-old point guard scored a career-high 44 points, including 36 after halftime. He also matched his career best for 3-pointers, going 7 of 10 from outside the arc, and made all 17 of his free throws. Thomas only turned the ball over once.

Memphis built a comfortable 45-31 lead in the first half. Then, the Grizzlies seemed to fall apart in the second half.

”Basically, we stayed in the locker room at halftime,” coach David Fizdale said.

Marc Gasol and Troy Daniels led Memphis with 24 points each. Mike Conley had 19 points and eight assists for the Grizzlies, who dropped their third straight– all at home.

Both teams had last-second chances to win in regulation. Gasol’s turnaround 8-footer bounced off the rim with 2 seconds left in regulation. Then with under a second remaining, Horford failed to convert an inbounds pass at the rim, thus forcing overtime at 97-all.

”Coach (Brad Stevens) told us at halftime, `Just stay with it. Stay composed,”’ Horford said. ”We had an awful first half, and he just said, `If you guys stay with it, I guarantee you that you’ll get hot, you’ll get to scoring.’

”We believed, and we kept playing.”

Thomas has led the Celtics in scoring the last three games. For the season, he is now averaging a career-best 26.6 points over 33.3 minutes per game. He ranks seventh in the NBA in scoring, and second in the Eastern Conference behind only Toronto’s DeMar DeRozan (27.9).

The Celtics’s Brad Stevens, at 40, is one of the youngest coaches in the league. Meanwhile, on the other sideline, Vince Carter, at 39-plus the oldest active player in the NBA, came off the bench to play for the Grizzlies.

The Celtics next visit the Indiana Pacers on Thursday, while the Grizzlies will visit the Detroit Pistons Wednesday night. Memphis is 7-0 this season on the second night of back-to-backs.

MIAMI, FL – NOVEMBER 28: Isaiah Thomas #4 of the Boston Celtics drives to the basket during a game against the Miami Heat at American Airlines Arena on November 28, 2016 in Miami, Florida.