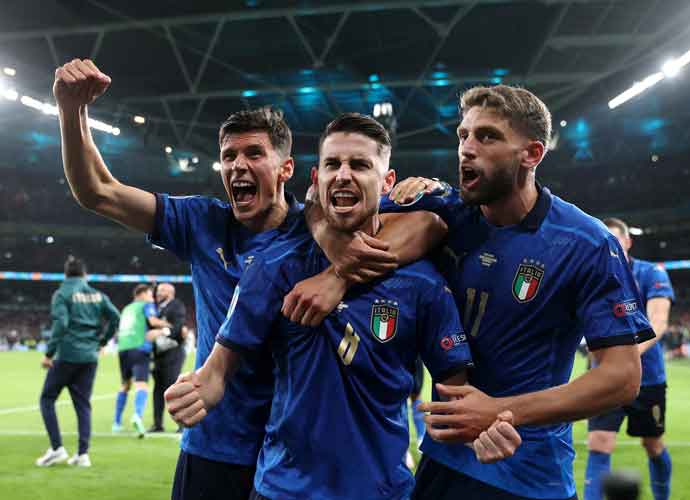 LONDON, ENGLAND - JULY 06: Jorginho of Italy celebrates with Matteo Pessina and Domenico Berardi after scoring their sides winning penalty in the penalty shoot out during the UEFA Euro 2020 Championship Semi-final match between Italy and Spain at Wembley Stadium on July 06, 2021 in London, England. (Photo by Carl Recine - Pool/Getty Images)

Italy has once again reached the pinnacle of European soccer, while England is left with heartbreak as the long wait for a major title continues.

Italy won the European Championship for the second time ever by defeating England 3-2 on penalty kicks. The match ended in a 1-1 draw after regulation, then neither side could produce a winning goal in extra time. The match was played at Wembley Stadium in London, England, which was filled with English fans preparing to celebrate the country’s first major international trophy since the 1966 World Cup.

Italy’s goalkeeper Gianluigi Donnarumma stood tall in the net, playing a decisive role in Italy’s shootout victory. England’s three misses came from Bukayo Saka, Marcus Rashford and Jadon Sancho, all players who were subbed on later in the game. These three who missed are some of the youngest on the squad. Saka is just 19 years old.

Less than four years ago, Italy hit rock bottom as an international team after failing to qualify for the 2018 World Cup. Now, earning the title of the best team in Europe and maintaining a 34-game unbeaten streak, manager Roberto Mancini and the Italian side have had a historical turnaround.

“It was impossible even to just consider this at one stage, but the guys were just amazing. I have no words for them,” said Mancini after the match.

England captain Harry Kane spoke on the team’s heartbreak. “The boys couldn’t have given more, Penalties are the worst feeling in the world when you lose. It’s been a fantastic tournament, we should be proud, hold our heads up high. It’s going to hurt now, it’s going to hurt for a while.”

The game started perfectly for England, as Luke Shaw hammered home the fastest goal in EURO final history off of a cross from Kieran Trippier in the second minute. This goal was the only real chance England had throughout the 120 minutes of gameplay, as England hardly possessed the ball for the remainder of the match.

On both squads, the players considered “penalty specialists” struggled from the spot and the spotlight ended up on the goalkeepers, both of whom proved their worth. However, Donnarumma made crucial saves and ultimately earned his side the trophy as well as earning himself Player of the Tournament.