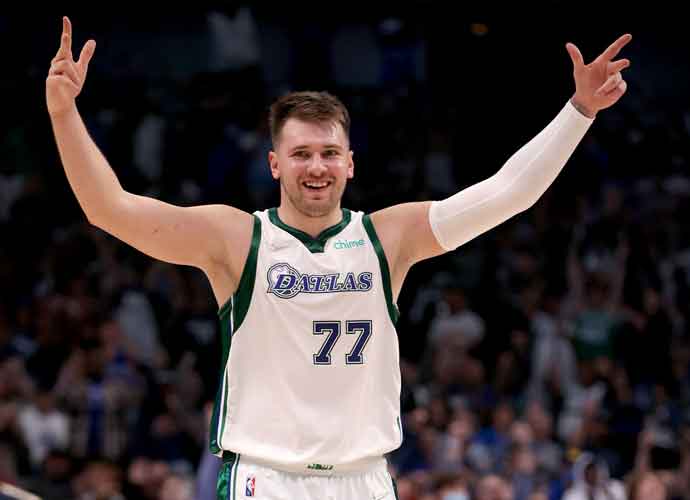 DALLAS, TEXAS - NOVEMBER 15: Luka Doncic #77 of the Dallas Mavericks reacts after scoring against the Denver Nuggets in the fourth quarter at American Airlines Center on November 15, 2021 in Dallas, Texas. (Photo by Tom Pennington/Getty Images)

The NBA offseason isn’t quite here, with the Finals not yet concluded, but it is still heating up. With the NBA Draft only about a week away, we’ve already seen two trades involving first-round picks. The latest involves the Dallas Mavericks and Houston big man Christian Wood.

The Mavericks are sending C Boban Marjanovic, F Marquese Chriss, G Trey Burke, GF Sterling Brown and the 26th overall pick in this year’s draft in exchange for Wood. With the trade, Dallas creates significant cap flexibility and addresses a need that the Maps have had for the better part of the last few seasons, a productive big man.

We’re about to see the best version of Christian Wood with Luka Doncic. Wood can finish lobs like Dwight Powell or pop for 3s like Maxi Kleber, and attack off the dribble better than them both. It’s a contract year so he’s gonna be hustling all year on defense too. Huge addition. https://t.co/6H3cpr40KG

Wood averaged 19.1 points per game, 9.9 rebounds and one block during his two seasons with the Rockets. His arrival adds a brand new source of production for Luka Doncic and company. Their limited options at center were a huge liability in their run to the Western Conference Finals. The 26-year-old has long been the center of trade rumors due to the Rockets’ current rebuilding state and their desire to play 2021 first-round pick Alperen Sengun.

Meanwhile, the Rockets now hold the No. 3, No. 17 and No. 26 picks in the NBA Draft. They have the ability to stash the picks to draft a future superstar, or they can make a blockbuster trade with those highly coveted lottery picks. Houston’s core is extremely young with 19-year-old Jalen Green, 21-year-old Kevin Porter Jr. and 20-year-old Josh Christopher thought to be the focus of Houston’s rebuild. It will be interesting to see who the Rockets will add alongside this young potential-filled core.

Wood is entering the final year of his contract next season and is due $14.3 million. The Mavericks have a few key free agents that have yet to pay, most notably Jalen Brunson who was a key factor in their postseason success this year.