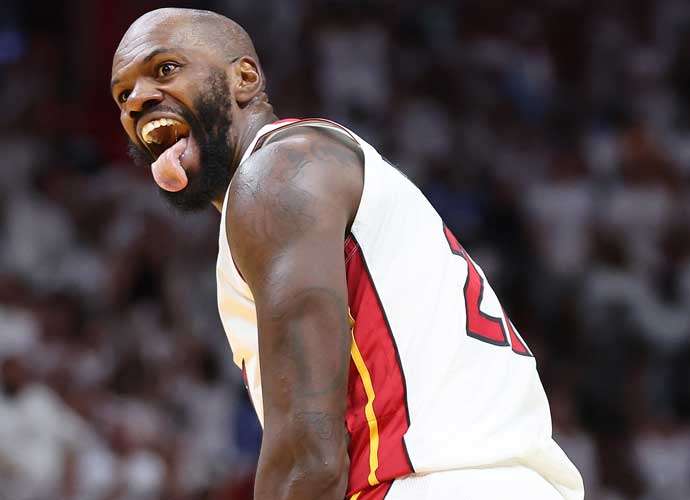 MIAMI, FLORIDA - APRIL 19: Dewayne Dedmon #21 of the Miami Heat celebrates a basket against the Atlanta Hawks during the second half in Game Two of the Eastern Conference First Round at FTX Arena on April 19, 2022 in Miami, Florida. NOTE TO USER: User expressly acknowledges and agrees that, by downloading and or using this photograph, User is consenting to the terms and conditions of the Getty Images License Agreement. (Photo by Michael Reaves/Getty Images)

Miami Heat center Dewayne Dedmon was suspended for one game without pay “for conduct detrimental to the team” after he displayed erratic behavior on the sidelines in a game Tuesday against the Thunder. Dedmon was ejected from the contest in the first quarter for sending a massage gun flying onto the court in what appeared to be frustration.

Though exact details remain unclear, the incident occurred shortly after Dedmon was subbed out of the game after five minutes on the floor. While speaking to teammates and coaches on the sidelines, Dedmon reportedly overreacted to something and struck a table, which propelled a massage gun onto the court while the game was in action. He was ejected immediately.

In a brief statement, the Heat said that the suspension was given with consultation from the NBA. Teams may hand suspensions to their own players as they deem necessary in cases that require disciplinary action. This season, Dedmon has primarily come off the bench for Miami and has scored 5.9 points per game while earning 3.7 rebounds.

Without Dedmon, the Heat had to complete the game with just seven players, but in a gritty back-and-forth contest, the team managed to defeat Oklahoma City 112-111. Jimmy Butler scored 35 points and Max Strus played a staggering 42 minutes to earn 22 points as the team’s second-highest scorer.

Despite entering the season with mild promise, the Heat have struggled with multiple injuries which have stymied the team’s progress. Before Dedmon was ejected Tuesday, Miami was already without Tyler Herro, Udonis Haslam, Kyle Lowry, Bam Adebayo, Nikola Jovic and others.

The Heat are currently eighth in the Eastern Conference standings with a 22-20 record and will be without Dedmon for a game against the Milwaukee Bucks Thursday. He will return for another game against the Bucks on Saturday, Jan. 14, though his impact on the game will do little to change Milwaukee’s status as a heavy favorite.