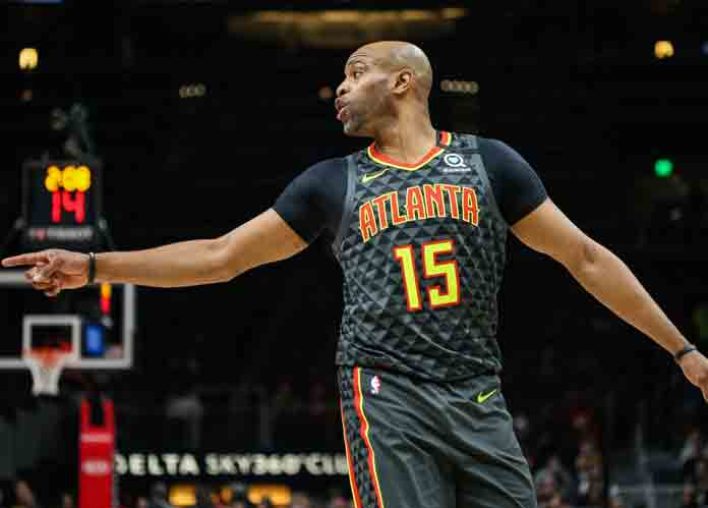 ATLANTA, GA - JANUARY 4: Vince Carter #15 of the Atlanta Hawks calls out to teammates during the fourth quarter of a game against the Indiana Pacers at State Farm Arena on January 4, 2020 in Atlanta, Georgia.

With the NBA announcing plans to restart its season a couple weeks ago, the Atlanta Hawks were one of the eight teams not included in the season restart as they had been eliminated from possibly making the playoffs. Vince Carter said that the 2019-2020 would be his last. When the NBA season got shut down it was unclear whether or not Carter would ever step back on to a NBA court. On Thursday, Carter officially made his decision.

During an episode of his Winging It podcast, Carter said he is “officially done playing basketball professionally.”

Carter played for 22-seasons in the NBA, being drafted by the Toronto Raptors in 1998. Carter is the first NBA player in history to play in four decades (1990s, 2000s, 2010s, and 2020s). During his podcast, Carter said, “If there was any disappointment because of the season – any of that – it was kind of easier to put it aside and handle it that way. It’s like, OK, it’s something bigger than my career.”

During his career, Carter played for the Raptors, Nets, Magic, Suns, Mavericks, Grizzlies, Kings and Hawks. He was most known for his insane dunking ability and show stopping dunks, which led him to winning the 2000 NBA dunk contest. Carter also was an 8-time all-star and won rookie of the year in 1998-1999.