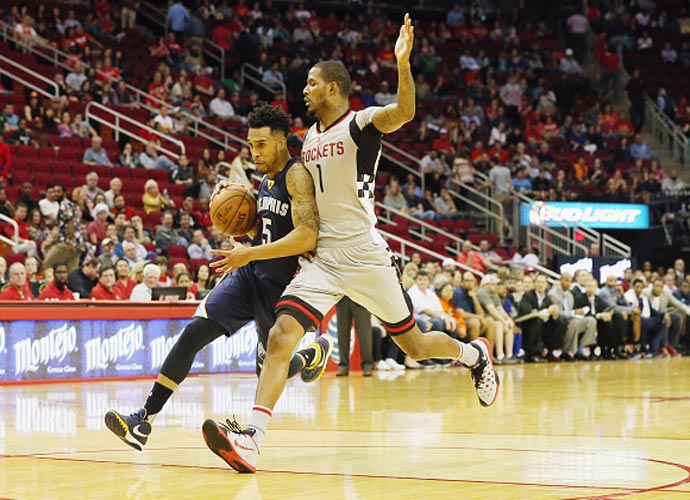 Caption:HOUSTON, TX - NOVEMBER 25: Courtney Lee #5 of the Memphis Grizzlies drives with the ball against Trevor Ariza #1 of the Houston Rockets during their game at Toyota Center on November 25, 2015 in Houston, Texas. (Photo by Scott Halleran/Getty Images)

The Memphis Grizzlies have traded veteran shooting guard Courtney Lee to the Charlotte Hornets as part of a three-team deal that also involves the Miami Heat. The trade will ultimately help boost the Hornets’ perimeter shooting and defense following the loss of defenseman Michael Kidd-Gilchrist to a shoulder injury.

Lee is currently in his eighth season in the NBA and has garnered a reputation as a coveted “3 and D guy,” in other words a player who can both score three-pointers and serve as a solid defenseman on the wing.

The Grizzlies have now acquired forward P.J. Hairston from the Hornets, as well as Chris Andersen and two second-round draft picks from the Heat, who will get Charlotte guard Brian Roberts, according to a source of the Associated Press. THe source spoke on the condition of anonymity because the deal has not been officially announced yet.

The Grizzlies also suffered a serious injury: center Marc Gasol broke his right foot shortly before the All-Star break, so Memphis is bringing in Andersen from the Heat in an effort to bolster its front-court depth. Andersen is in the final year of his contract.

Hairston is also a promising player for the Grizzlies. He is a second-year forward who started 43 games for the Hornets this season, averaging six points and 2.7 rebounds in 19.7 minutes per game.

The deal is also expected to help the Heat avoid the luxury tax.

HOUSTON, TX – NOVEMBER 25: Courtney Lee #5 of the Memphis Grizzlies drives with the ball against Trevor Ariza #1 of the Houston Rockets during their game at Toyota Center on November 25, 2015 in Houston, Texas. (Photo by Scott Halleran/Getty Images)