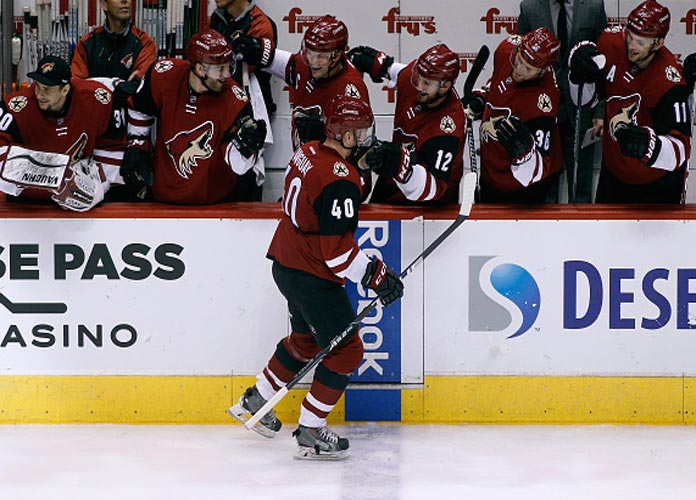 GLENDALE, AZ - MARCH 05: Alex Tanguay #40 of the Arizona Coyotes is congratulated by teammates after his second period goal against the Florida Panthers at Gila River Arena on March 5, 2016 in Glendale, Arizona. (Photo by Ralph Freso/Getty Images)

The city of Glendale, Arizona, has ended its 18-year relationship with the Arizona Coyotes. The city announced that it did not renew its operating agreement with the NHL team beyond the 2021-22 NHL season.

“With an increased focus on larger, more impactful events and uses of the city-owned arena, the city of Glendale has chosen to not renew the operating agreement for the Arizona Coyotes beyond the coming 2021-22 season,” the city announced.

With an increased focus on larger, more impactful events and uses of the city-owned arena, the city of Glendale has chosen to not renew the operating agreement for the Arizona Coyotes beyond the coming 2021-22 season.

The city had informed the Coyotes of the decision to sever ties.

“We are thankful to the NHL and Arizona Coyotes for being a part of the Glendale community for the past 18 years,” Glendale city manager Kevin Phelps said in a statement. “The decision to not renew the operating agreement with the Coyotes was not made overnight or in a vacuum. We carefully weighed input from key stakeholders, our expert economist, our arena management firm, and our city council.”

Arizona has not finished top-three in their division since winning it in 2011-12. They reached the conference finals that same year but have made the playoffs only once since. Last season, the Coyotes finished 24-26-6 before firing coach Rick Tocchet. Andre Tourigny, a former OHL head coach, signed a three-year deal to replace Tocchet on July 1.

The city’s decision to sever ties is financially motivated. The city hired Applied Economics, an economic consulting firm, to determine the spending-habit differences between hockey game attendees and concertgoers. The firm determined that concert-goers spend more than hockey fans. The report found that each Coyotes home game drove $12,000 in sales and bed taxes to Westgate, compared to $25,000 for concerts. It also found that concertgoers spend an average of $58 at Westgate, double the $28 hockey-game attendees spend.

“Over the next year, the City will be announcing many new projects that will generate incredible new excitement for residents, visitors, and stakeholders,” Phelps said. “As amazing as the Sports and Entertainment District is today, the next several years will be even more transformative as this momentum continues.”

The Coyotes will now have to look for a new home. A likely destination for the team is Tempe, Arizona.