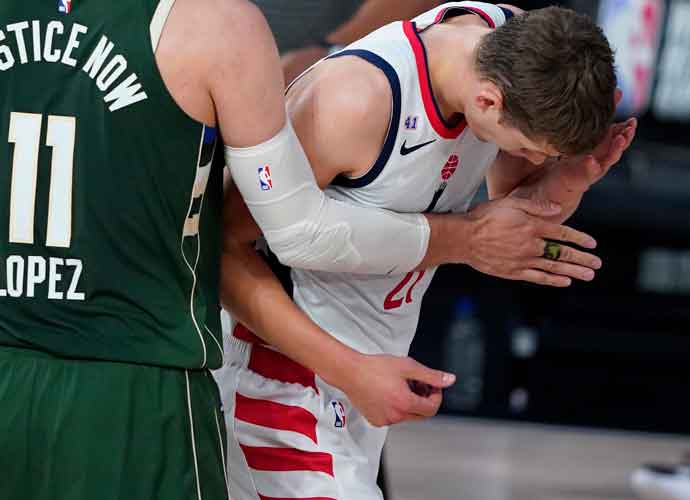 LAKE BUENA VISTA, FLORIDA - AUGUST 11: Moritz Wagner #21 of the Washington Wizards reacts after a headbutt by Giannis Antetokounmpo #34 of the Milwaukee Bucks during the first half at Visa Athletic Center at ESPN Wide World Of Sports Complex on August 11, 2020 in Lake Buena Vista, Florida.

During Tuesday’s game between the Milwaukee Bucks and the Washington Wizards Bucks’ star Giannis Antetokounmpo clearly incensed by something hauled off and headbutted Wizards forward Moritz Wagner. Antetokounmo was immediately ejected for this and will now be suspended for the Bucks’ final seeding game.

This is a generous suspension considering that Antetokounmpo was likely to rest for the last game with the Bucks already having the first seed locked up, and the NBA has usually taken a much harder stance towards physical violence ever since the “Mallace in the Palace.” While Bucks coach Mike Budenholzer was visibly upset in the video, he took this as a more positive experience than most would. “This is nothing. Giannis has been dealing with this for a long time,” Budenholzer said. “He’s an MVP. People are gonna try him. He normally is phenomenal, and today was a slip-up. I think it’s probably, in some ways, it could be one of the best things that happened today, and it’s a learning moment. We’ll all remember how important it is that we’ve got to keep our cool.”

“That was a very strange few seconds,” said Wizards coach Scott Brooks. “I thought Moe stepped in and took a charge. That’s what you have to do. You’ve gotta drop off and force him to shoot. He can drive, [you] step up and take a charge. And a few seconds later, he got a head-butt.”