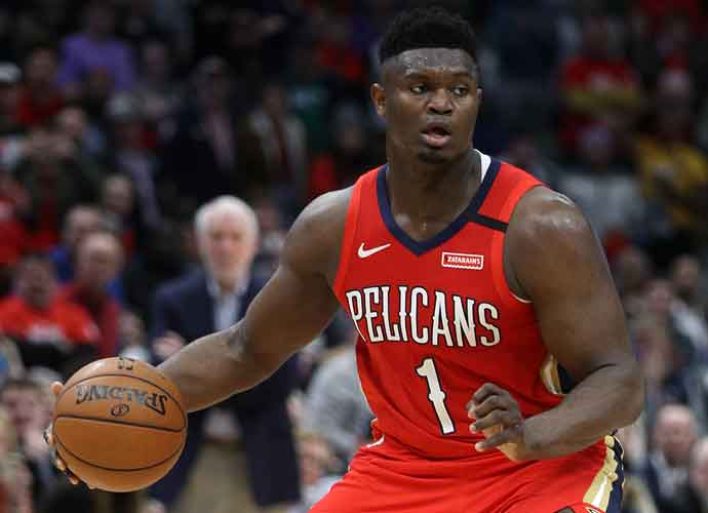 NEW ORLEANS, LOUISIANA - JANUARY 22: Zion Williamson #1 of the New Orleans Pelicans drives the ball up the court against the San Antonio Spurs at Smoothie King Center on January 22, 2020 in New Orleans, Louisiana.

The Bucks visited the Pelicans in New Orleans Tuesday pitting the reigning NBA MVP Giannis Antetokounmpo against the No. 1 overall pick in the 2019 NBA draft pick Zion Williamson. The Bucks won the game 120-108 but NBA fans caught a glimpse of what can transpire when two great athletes square off.

The New Orleans’ faithful were on the edge of their seats every time the two players went head to head, erupting with a loud cheer as Williamson powerfully ripped a rebound away from Antetokounmpo to keep possession for the Pelicans in the fourth quarter.

The Bucks pulled away late in the game behind an impressive stat line from Antetokounmpo consisting of 34 points, 17 rebounds and six assists in 33 minutes. When asked how he thought a game against the Greek Freak would play out Williamson responded, “I mean, he’s a former MVP. It’s like going up against any great player. Do as much as you can to slow him down. I mean, he’s his own player; he brings his own style to the game. That’s why he’s Giannis.”

There was a moment where Antetokounmpo recorded a highlight of his own when the Pelicans were on a fast break. Williamson was elevating for a tough layup, but was denied at the top of his jump by the four-time all-star. The two had been going at each other for a minute of action prior with Williamson drawing a foul on Antetokounmpo on multiple possessions and another that saw him throw down a dunk on Brook Lopez.  Antetokounmpo responded with a finger roll and also drew a foul of his own against Williamson in the paint.

Williamson finished with 20 points, seven rebounds and five assists but shot 26% from the field. The Bucks contested 15 of the 19 shots Williamson attempted, while Antetokounmpo held Williamson to 1-of-6 shooting with two turnovers when he was the on-ball defender, according to ESPN Stats & Info research.

“I remember I looked at Lonzo at one point, and I’m like, ‘Eh, I don’t like this — I feel like I’m shooting too much at a certain point,'” Williamson told ESPN. “And he told me I should never feel like that, so I just kept going.” Williamson helped rally his team within seven in the fourth quarter but they ended up falling short.

Milwaukee improved to a league-best 43-7 and New Orleans is 6.5 games out of a playoff spot with a 20-31 record having lost two straight.