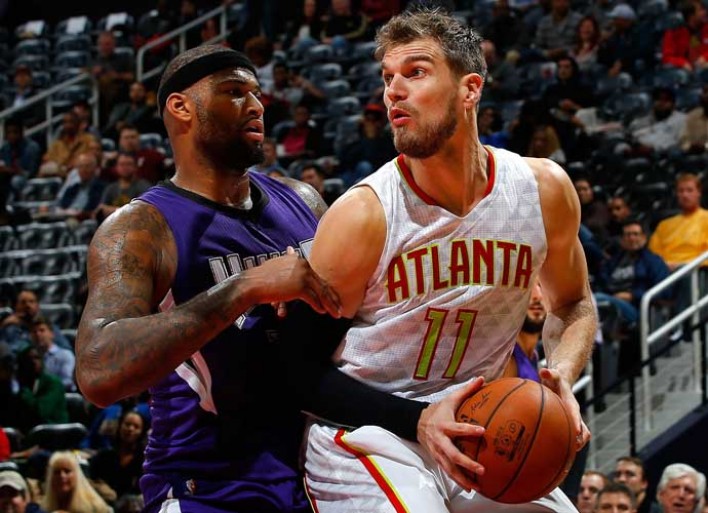 ATLANTA, GA - NOVEMBER 18: Tiago Splitter #11 of the Atlanta Hawks drives against DeMarcus Cousins #15 of the Sacramento Kings at Philips Arena on November 18, 2015 in Atlanta, Georgia. NOTE TO USER User expressly acknowledges and agrees that, by downloading and or using this photograph, user is consenting to the terms and conditions of the Getty Images License Agreement. (Photo by Kevin C. Cox/Getty Images)

DeMarcus Cousins has butted heads with George Karl in the past, but the coach is now firmly in the center’s corner. On Wednesday night, Karl not only supported Cousins’ All-Star bid, but called him the best center in the league.

“DeMarcus has shown at a high, high level that he’s an All-Star,” Karl told reporters after Cousins’ 36 points and 16 rebounds against the Lakers. “Is there a better center playing basketball right now in the NBA? I don’t think there is.

“He’s helped us at both ends of the court,” the coach continued. “I don’t know anybody that’s playing at this level right now, and I hope the NBA recognizes it and gives him an opportunity to play in Toronto [at the All-Star Game].”

There’s no question that Cousins has been a key part of the Kings’ turnaround. Since 2016 began, he’s scored at least 29 points in eight of their nine games. Sacramento now sits in the eight spot in the west after starting the season 1-7.

“That’s not even a question,” Cousins said when he was asked if he was the best center around. “It’s not even about that. I feel I can still improve in so many ways. I feel I can improve a lot on the defensive end. … I feel like I can make the pass more than I have. Still a lot of areas I need to improve. It’s not about that. It’s about playing the right way and helping this team get to the next level.”

Photo: Tiago Splitter #11 of the Atlanta Hawks drives against DeMarcus Cousins #15 of the Sacramento Kings at Philips Arena on November 18, 2015 in Atlanta, Georgia.