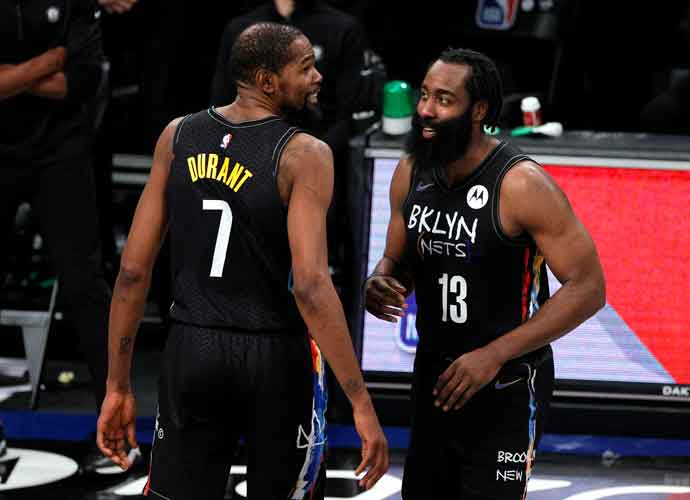 NEW YORK, NEW YORK - FEBRUARY 02: Kevin Durant #7 and James Harden #13 of the Brooklyn Nets react during the second half against the LA Clippers at Barclays Center on February 02, 2021 in the Brooklyn borough of New York City. The Nets won 124-120. (Photo by Sarah Stier/Getty Images)

How dangerous can the Brooklyn Nets be when the team is fully healthy? Well, Kevin Durant and Co. showed just exactly how: incredibly dangerous.

Durant tallied 27 points and nine assists, James Harden added 25 and a season-best 16 assists, and the team rolled to an easy 138-112 win over Chicago Wednesday night in a matchup between the conference’s top teams.

Durant had 17 points in the third alone, which helped Brooklyn put out of reach a game that was tied at 71 early in the stanza. The second-place Nets played with all three superstars in the lineup for just the second time this season.

“When that run happened, I think it was just a continuous sort of flow we had from the first half,” Kyrie Irving said. “We just felt like once we break this open, hit a few more 3s, make it tough for them on the defensive end — we felt like we’d have control of the game.”

“We’re trying to make no statements to the league,” Durant said. “I mean, who cares what they think. We know what we bring to the table, and it’s all about us. But I’m sure people were watching the game tonight.”

Irving added nine points in just his third game of the year. The seven-time All-Star has, of course, made headlines for refusing the COVID-19 vaccine and is barred from playing in Brooklyn.

Patty Mills scored 21 and nailed of 6 of 8 from beyond the arc to snap the Nets out of 5-of-7 losing streak.

“We’re that good,” Harden said. “We have a chance to be that good. We just haven’t had enough of it.”

Zach LaVine scored 22 and DeMar DeRozan added 19 points, but Chicago lost for the second time in three games after a nine-game winning streak—their best run since the end of the 2010-11 regular season. The team also had its nine-game home win streak snapped.

“I think you own it,” coach Billy Donovan said. “I think our guys have worked hard up to this point to be where we are in the standings, and with that there’s a greater responsibility.”

Chicago has a similar vaccine mandate as New York City, though an exception allowed Irving to play. It applies to visiting pro and college athletes as well as non-resident performance artists.

“I’m in Jersey,” Irving said when asked where he watches Nets home games. “I go into the facility, into Brooklyn, to get my treatment, do workouts and then I go back home and I’m either with my son or my fiancee or both. If you only understood how many people support the Nets from my hometown and also from where I’m from, it’s a lot. Sometimes, it can be a little overwhelming. I can’t really go out and watch at a local bar or anything like that.”

The Nets will host Oklahoma City on Thursday, while the Bulls will host Golden State on Friday.