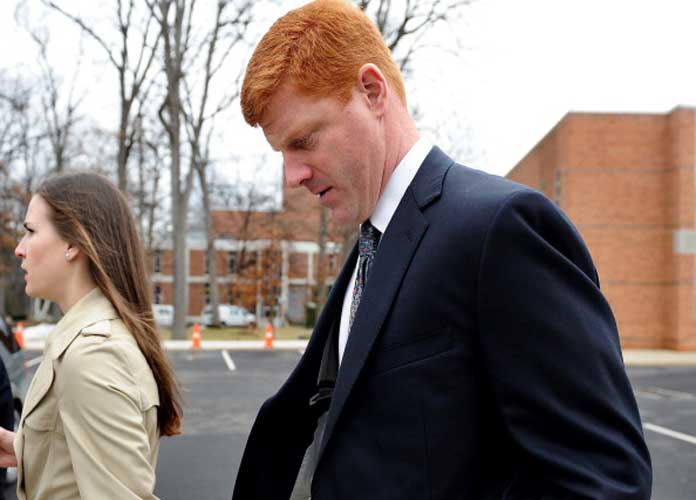 STATE COLLEGE, PA - JANUARY 24: Former Penn State assistant coach Mike McQueary walks outside after paying respect to former Penn State Football coach Joe Paterno during a public viewing at the Pasquerilla Spiritual Center on the campus of Penn State on January 24, 2012 in State College, Pennsylvania. Paterno, who was 85, died due to complications from lung cancer on January 22, 2012. (Photo by Patrick Smith/Getty Images)

A Pennsylvania jury on Thursday, in a defamation case against Penn State University, awarded $7.3 million to Mike McQueary, the former assistant football coach who in 2001 told head coach Joe Paterno that he had witnessed Jerry Sandusky sexually molesting a player in the locker room shower.

After approximately four hours of deliberation, the jury found that the university had defamed McQueary, 42, with a statement in 2011 defending its former athletic director and vice president against a charge of perjury related to McQueary’s claim about Sandusky, a longtime defensive coordinator at Penn State.

“What Penn State has done to Mike McQueary is outrageous,” his lawyer, Elliot Strokoff, said during closing arguments. “He should not have been a scapegoat in this matter, and certainly not for five years.”

Judge Thomas Gavin, who presided in the case, has yet to rule on McQueary’s accusation that Penn State retaliated against him after he testified at Sandusky’s trial in 2012. McQueary was not permitted to coach at the Nittany Lions’ first game after Paterno was fired in connection with the scandal, in 2011, and the assistant coach’s contract was not renewed.

Even prior to Thursday’s ruling, the scandal had already cost Penn State well over $100 million in NCAA penalties, legal fees and settlements to Sandusky’s victims. Sandusky was convicted in 2012 of sexually abusing 10 boys and was sentenced to 30 to 60 years in prison. Over 32 victims in total accused Sandusky.

McQueary testified to a grand jury in 2010 that in 2001 he informed Paterno, and later Athletic Director Tim Curley and the university vice president Gary Schultz, that he had witnessed the abuse.

This testimony helped prosecutors eventually charge Sandusky, who is now 72.

Paterno died due to complications from lung cancer on January 22, 2012 at the age of 85.

The Pennsylvania attorney general subsequently charged Curley and Schultz with perjury after they told a grand jury that McQueary did not tell them the severity of Sandusky’s offense. The perjury charge was dismissed, but Schultz, Curley and Graham B. Spanier, the former university president, still face criminal charges of failure to report suspected child abuse and endangering the welfare of children.

McQueary, testifying at a hearing one month after the scandal came to light in 2011, gave the first public account of his reporting the abuse to Paterno.

At the time he witnessed the abuse, McQueary, who was a backup quarterback for Penn State in the mid-1990s, was a graduate assistant.

The former assistant coach’s testimony in December 2011 helped demonstrate that Paterno, one of the most successful and well-liked coaches in college football history, was aware that Sandusky had abused a boy at least ten years before Sandusky’s behavior became publicly known. Court documents released this summer showed that Paterno heard such an allegation as early as 1976.

STATE COLLEGE, PA – JANUARY 24: Former Penn State assistant coach Mike McQueary walks outside after paying respect to former Penn State Football coach Joe Paterno during a public viewing at the Pasquerilla Spiritual Center on the campus of Penn State on January 24, 2012 in State College, Pennsylvania. Paterno, who was 85, died due to complications from lung cancer on January 22, 2012. (Photo by Patrick Smith/Getty Images)