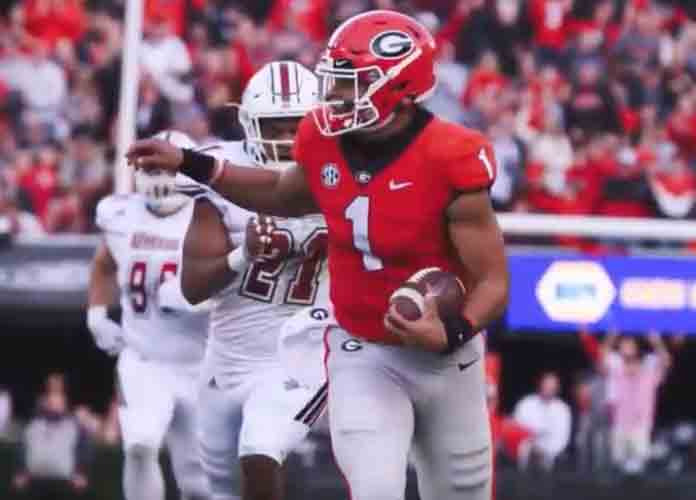 Justin Fields was the number one recruit in the ESPN class of 2018’s top 300. The 6-foot-3, 221-pound native of Kennesaw, Georgia was supposed to be the future for the program.

If Fields were to transfer, he’d spend 2019 season sitting out due to transfer rules. That’s the case for the underclassmen unless he can receive a waiver. According to ESPN, Fields is still with the team and practicing but that does not reflect his future plans. There is a possibility he may come back. Fields hasn’t formally requested a transfer and also has yet to be placed in the NCAA’s transfer portal.

Fields and his father have met with coach Kirby Smart multiple times in the past few weeks to talk about the young star’s future. If Fields does leave, he’s expected to look into Florida State, Ohio State, and Oklahoma.

There looks to be little hope that Fields will start in Georgia anytime soon. Fromm has started every game except for one in the past two seasons. This year, he led the Bulldogs to an 11-2 record. If Fields leaves, Fromm would be the only scholarship quarterback on the roster. The Bulldogs have a verbal commitment from quarterback John Rhys Plumlee, the No. 148 prospect in the ESPN 300.

Last year, Jacob Eason left Georgia after Fromm led the Bulldogs to the SEC title and the College Football Playoff National Championship. Fromm took his job following Eason injuring his leg early in the season opener. Eason transferred to Washington and is expected to take over for Jake Browning next season with the Huskies. Fields joins Baker Mayfield and Cam Newton as college quarterbacks who chased success following transfers.