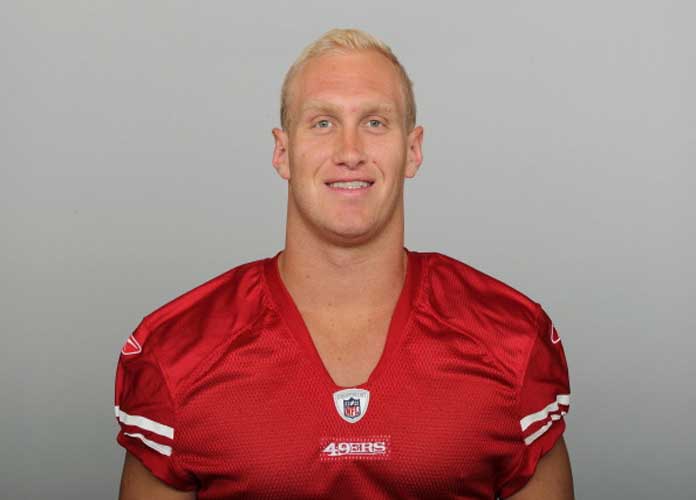 SAN FRANCISCO, CA - CIRCA 2011: In this handout image provided by the NFL, Konrad Reuland of the San Francisco 49ers poses for his NFL headshot circa 2011 in San Francisco, California. (Photo by NFL via Getty Images)

The ex-NFL star suffered the aneurysm Nov. 28 and underwent surgery a day later at UCLA Medical Center in California.

“We lost a Raven today,” Harbaugh said. “I just want to offer condolences to his family. We love Konrad Reuland. Every single guy in the locker room loves him.”

Harbaugh then recited a short psalm.

Reuland played four games for Baltimore from 2014-2015, starting in one. He didn’t make any catches. The tight end also played for the Indianapolis Colts and the San Francisco 49ers.

Reuland, who was born in Mission Viejo, Calif., played collegiately at Notre Dame for two years first, then Stanford and originally signed with the San Francisco 49ers as an undrafted free agent before the 2011 season. After he was cut twice by the 49ers, the tight end signed with the Jets. He played in 26 games over the 2012 and 2013 seasons.

We have lost a bright light in our beloved brother, Konrad Reuland. His memory and spirit will never leave us. We love you. #RIPKonrad pic.twitter.com/XSpYhwhRSx

During his time with the Jets, Reuland had 12 catches for 90 yards and no touchdowns. The Jets placed Reuland on injured reserve in November 2013 and later waived him. The Colts took him on as a free agent on July 31 this year, although he was released on August 29.

Reuland played in three preseason games with Indianapolis this year, recording one catch for 10 yards in the team’s third preseason game against the Philadelphia Eagles.

Our thoughts are with the friends and family of Konrad Reuland during this difficult time. #RIPKonrad https://t.co/3pDN6R5U3l pic.twitter.com/fehDALXNsh

We were all lucky 2 be Konrad Reuland’s teammate..He always worked hard..He was always upbeat..He will be incredibly missed.. RIP my brother pic.twitter.com/VySFGvCQSe

The former NFL star had been waived seven times in total since entering the league in 2012.

Reuland’s death is the latest tragedy in a rough year for the Ravens. Second-year cornerback Tray Walker died in a dirt bike accident in March, and longtime defensive line coach Clarence Brooks died in September following a battle with esophageal cancer.

SAN FRANCISCO, CA – CIRCA 2011: In this handout image provided by the NFL, Konrad Reuland of the San Francisco 49ers poses for his NFL headshot circa 2011 in San Francisco, California. (Photo by NFL via Getty Images)