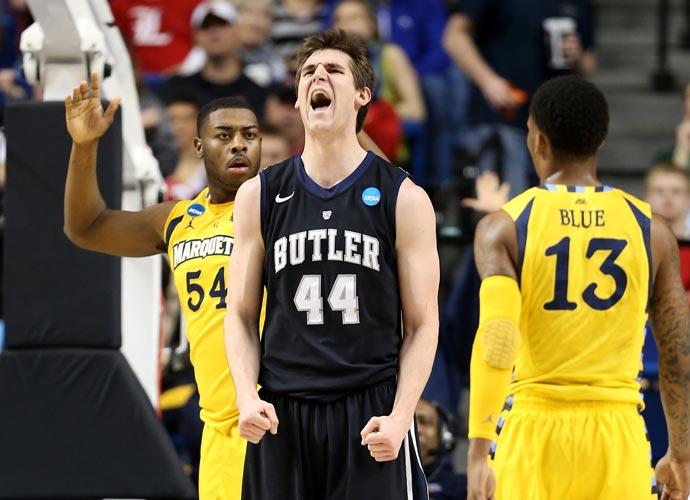 LEXINGTON, KY - MARCH 23: Andrew Smith #44 of the Butler Bulldogs reacts after a play against the Marquette Golden Eagles in the first half during the third round of the 2013 NCAA Men's Basketball Tournament at Rupp Arena on March 23, 2013 in Lexington, Kentucky. (Photo by Andy Lyons/Getty Images)

Andrew Smith, who played on both Butler teams that reached the NCAA title game died on Tuesday after a battle with cancer. He was 25-years-old.

Andrew peacefully passed away in his sleep and in my arms as I told him I loved him this morning. Love you always, Smith.

Smith was a bench player in 2010 as a freshman, but started for the Bulldogs as a sophomore. After his career at Butler, he briefly played in Lithuania, before returning to Indiana in 2013. He was diagnosed with non-Hodgkin lymphoma in January 2014. His loss was felt by Celtics head coach Brad Stevens, who led those Butler teams to national prominence.

To the toughest guy I ever met – Thank you, Andrew. We love you and will always be inspired by you. — Brad Stevens (@BCCoachStevens) January 12, 2016

Stevens had missed his team’s recent game in Chicago to visit his former player.

“The last week’s been tough,” Stevens said. “I was happy that I got a chance to say goodbye. And this is really about, when you coach somebody, you get a lot more out of coaching them than they do from you. And that’s that. I could go on and on, and it wouldn’t do him justice.

“[Smith] was special. He was tough,” Stevens added with his voice cracking. “He set a great example.”

“The Butler community is profoundly sad today with the news of Andrew’s passing. We saw the way Andrew fought on the basketball court and we saw the way he fought for his health. In both cases, we saw the best of Andrew Smith. But that’s what we always saw from Andrew. He gave his all, all the time.

“As an Academic All-American, he represented the best of Butler in the classroom and on the court. Above all else, what made Andrew special was the way that he genuinely cared for others. Within his large frame was an even larger heart. He is, was, and always will be a Bulldog. The Butler community is proud to have been part of his life, and our thoughts are with his wife, Samantha; his parents, Debbie and Curt; and the rest of his family.”

Photo: Andrew Smith #44 of the Butler Bulldogs reacts after a play against the Marquette Golden Eagles in the first half during the third round of the 2013 NCAA Men’s Basketball Tournament at Rupp Arena on March 23, 2013 in Lexington, Kentucky. (Photo by Andy Lyons/Getty Images)

Read more about:
Andrew Smith Butler Bulldogs NCAA Basketball
Listen to the uInterview Podcast!
Get the most-revealing celebrity conversations with the uInterview podcast!