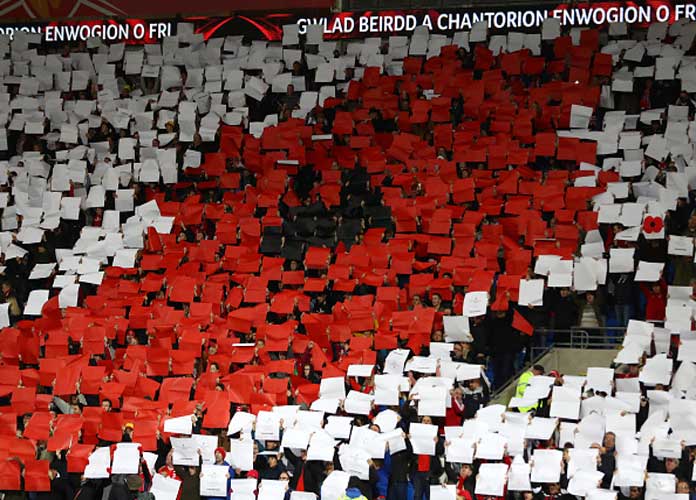 CARDIFF, WALES - NOVEMBER 12: Supporters holds up placards to form a giant poppy ahead of Remembrance Sunday prior to the FIFA 2018 World Cup Qualifier between Wales and Serbia at Cardiff City Stadium on November 12, 2016 in Cardiff, Wales. (Photo by Michael Steele/Getty Images)

England and Scotland players wore armbands featuring the flower when they played at Wembley on November 11.

Wales and Northern Ireland’s respective games featured on-field displays or in the stands to mark the holiday, during which fallen soldiers are honored.

England’s Football Association will appeal against the fine of £35,311 ($43,667), with Scotland, Wales and Northern Ireland yet to decide.

A Scottish FA (SFA) spokesman confirmed discussions between the home nations have already taken place and an official appeal is likely to be lodged early in the new year.

FIFA disciplinary committee chairman Claudio Sulser said he completely respected the commemorations but emphasized that the rules “need to be applied to all member associations.”

“The display, among others, of any political or religious symbol is strictly prohibited,” he added. “In the stadium and on the pitch, there is only room for sport, nothing else.”

Following Wales’ 1-1 draw at home to Serbia last month, FIFA opened disciplinary proceedings looking at “fans in the stands wearing the poppy” and the presence of “a member of the armed forces holding a bunch of poppies at the exit of the tunnel,” according to the Football Association of Wales (FAW).

Similarly, the holding of a minute’s silence, the laying of a wreath and a poppy display by fans before Northern Ireland’s 4-0 win over Azerbaijan on Nov. 11 have led to the punishment of the Irish FA.

FIFA has also punished the Irish FA with a £3,930 ($4,860) fine after its players wore shirts commemorating the centenary of the Easter Rising earlier this year.

CARDIFF, WALES – NOVEMBER 12: Supporters holds up placards to form a giant poppy ahead of Remembrance Sunday prior to the FIFA 2018 World Cup Qualifier between Wales and Serbia at Cardiff City Stadium on November 12, 2016 in Cardiff, Wales. (Photo by Michael Steele/Getty Images)