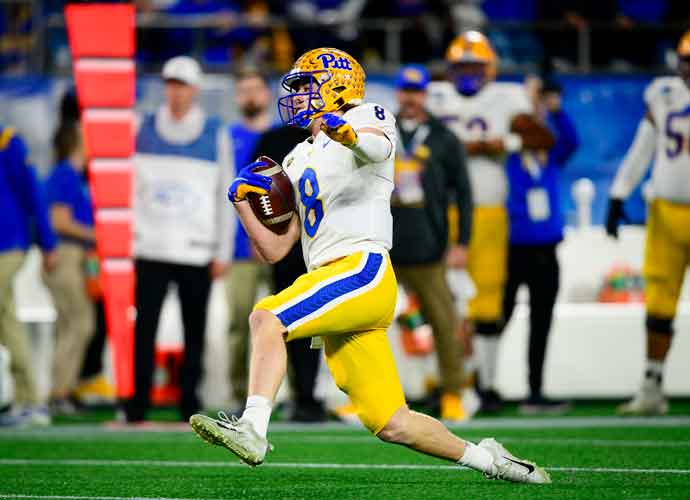 CHARLOTTE, NORTH CAROLINA – DECEMBER 04: Kenny Pickett #8 of the Pittsburgh Panthers fakes a slide while running for a touchdown during the ACC Championship game against Wake Forest at Bank of America Stadium on December 04, 2021 in Charlotte, North Carolina. (Photo by Logan Whitton/Getty Images)

New NCAA interpretation will count a fake slide as the end of the play. This comes after a fake slide got University of Pittsburgh quarterback Kenny Pickett into the end zone in Saturday’s ACC Championship game against Wake Forest.

“Any time a ball carrier begins, simulates, or fakes a feet-first slide, the ball should be declared dead by the on-field officials at that point,” a memo released by NCAA national coordinator of officials Steve Shaw said. “The intent of the rule is player safety, and the objective is to give a ball carrier an option to end the play by sliding feet first and to avoid contact. To allow the ball carrier to fake a slide would compromise the defense that is being instructed to let up when the ball carrier slides feet first.”

During the ACC Championship, Pickett used a fake slide and went on to run for a 58-yard touchdown. Defenders paused when they assumed Pickett was going down, but Pickett used that time to instead make a cut and run for 40 more yards.

“I just kind of started slowing down and pulling up and getting ready to slide, and I just kind of saw their body language and they just pulled up as well,” Pickett said. “I have never done that before. I just kind of kept going after I initially started to slide.”

Despite criticism from Wake Forest coach Dave Clawson, Shaw says there is no need for a new rule, because the new interpretation of the existing rule clarifies when to call the play dead. The officials of upcoming games have been notified of the change.