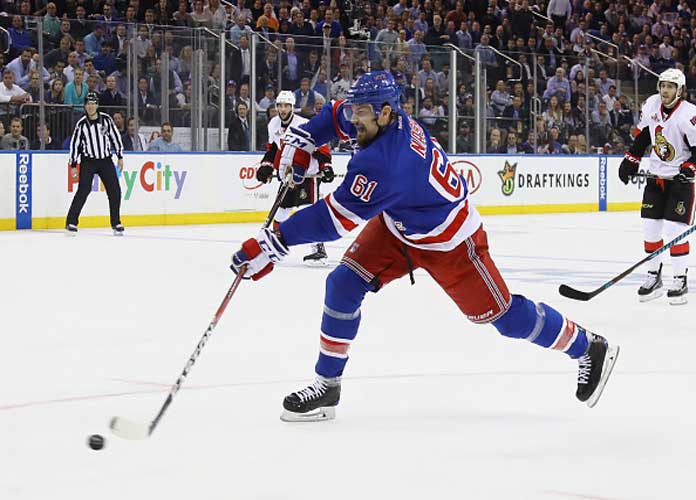 NEW YORK, NY - MAY 02: Rick Nash #61 of the New York Rangers scores against the Ottawa Senators at 12:21 of the second period in Game Three of the Eastern Conference Second Round during the 2017 NHL Stanley Cup Playoffs at Madison Square Garden on May 2, 2017 in New York City. (Photo by Bruce Bennett/Getty Images)

At just 34 years old, former New York Rangers star Rick Nash is being forced to retire, it was announced on Friday.

After suffering another concussion with the Boston Bruins last March and sitting out the postseason, he decided to not sign a contract as a free agent this summer. The six-time All-Star previously missed six weeks in 2013 with concussion symptoms while playing in New York.

In a statement from his agent Joe Resnick, Nash laid out why he chose to retire. The statement read: “Due to unresolved issues/symptoms from the concussion sustained last March, Rick Nash will be forced to retire from the game of hockey. Under the advice of his medical team, the risk of further brain injury is far too great if Rick returns to play. Rick would like to thank everyone who has supported him during this difficult time period.”

Nash called it quits on a 15-year career that began with being the No. 1 overall pick for the Columbus Blue Jackets. In 1,060 games, Nash would score 437 goals and 368 assists. Before his retirement, he was third among active players in goals scored. Only Alex Ovechkin and Patrick Marleau scored more. During the 2003-2004 season, Nash led the league with 41 goals.

Nash signed an eight-year, $62.4 million contract with the Blue Jackets in 2010. During the span of that deal, he’d be traded twice. First, he was shipped off to the Rangers in a six-player blockbuster trade in July 2012. Then, Nash was dealt to Boston as a free agency rental.

Some thought Nash would sit out summer free agency and then join a team to ring chase once it became clear who was in the title contention. Resnick denied that was the case last summer.

“Rick has the utmost ethics and integrity,” he told ESPN. “We turned down a lot of money. Let’s put it that way.”