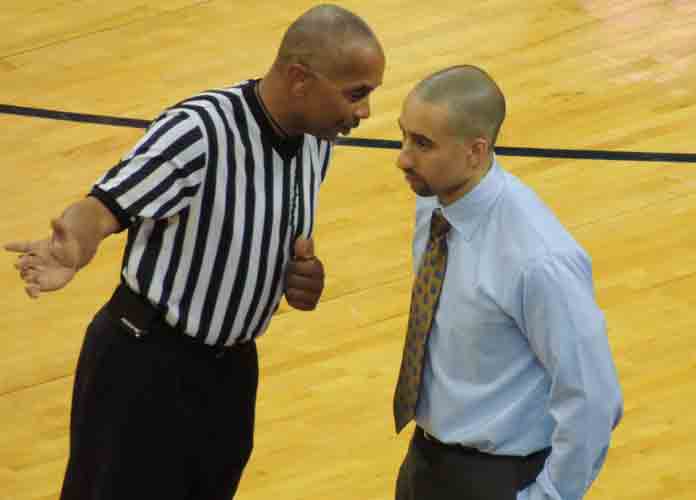 Description: English: VCU head coach Shaka Smart speaks with an official at a game against the University of Virginia on November 12, 2013 Date 13 November 2013, 07:15:44 Source: Own work Author: Rikster2 (Wikipedia)

The University of Michigan head coach John Beilein has left Ann Arbor, in a surprising move to go to the Cleveland Cavaliers to become the new head coach, after the firing of NBA champion Tyronn Lue.

Jon Rothestein of CBS Sports reports that Shaka Smart and his Texas Longhorns are currently trying to hire Luke Yaklich, a former assistant of Beilein’s Michigan team. Beilein recently left the Wolverines as well to join the Cavaliers, the fifth coach in 10 years from the NCAA straight into the NBA. Former NBA star and “Fab Five” member Juwan Howard is set to replace Beilein for the University. Yaklich was Beilein’s defensive specialist and was his top assistant coach.

“As a high school coach, I focused entirely on defense,” Yaklich said, according to Michigan Insider. “At the high school level, coaching offense is more about skill development, about making your players better shooters, better ball-handlers, better scorers.”

Yaklich will replace Smart’s assistant coach Darrin Horn, who recently took a head coaching job at Northern Kentucky in April. Horn has a track record of developing great big men, with the likes of Jarett Allen and Mo Bamba, former NBA first-round picks. He also helped coach this year’s Big 12 Freshman of the Year, Jaxson Hayes, who might be a first round lottery pick in the upcoming draft on June 20.

Yaklich will now be charged with filling big shoes in Smart’s coaching staff, who will be in for a crucial upcoming year. Smart’s coaching staff is looking concrete as Jai Lucas and Neill Berry are on the staff as well. Yaklich will be a massive pickup for Smart, as the promising head coach is showing serious signs of improvement this offseason ahead of the new calendar year.

Howard will be needing a replacement as well, as he needs to rebuild before the start of the next season to have a clear vision on what he think should be good enough to make a championship run.