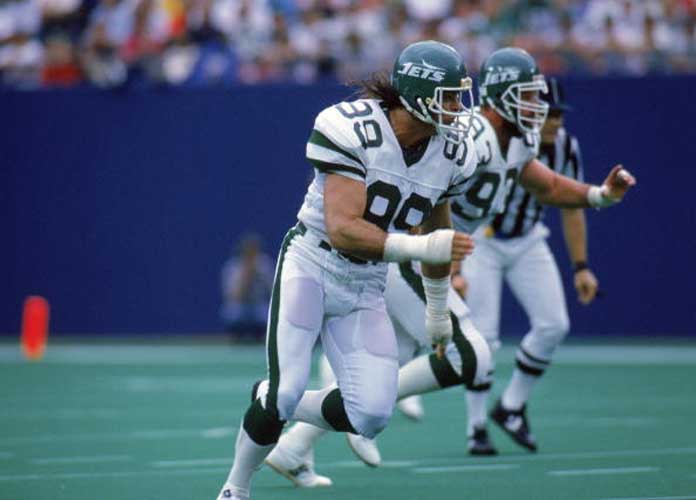 MEADOWLANDS - SEPTEMBER 18: Defensive end Mark Gastineau #99 of the New York Jets runs on the field during a game against the Houston Oilers on September 18, 1988 at Giants Stadium in the Meadowlands, East Rutherford, New Jersey. (Photo by Rick Stewart/Getty Images)

“When my results came back, I had dementia, Alzheimer’s and Parkinson’s,” the former Jets defensive lineman said in an interview on WOR radio in New York on Thursday evening. “Those were three things that I have.”

Gastineau, 60, said he was diagnosed a year ago and he blames it on poor tackling technique. He was one of the NFL’s most feared pass-rushers in the 1980s.

“I led with my head all the time,” Gastineau added.

Gastineau retired in 1988 after 10 seasons with the Jets.

On the radio interview Thursday, the former star was promoting USAFootball.com and the Heads Up Football program, which he believes make the sport safer.

Gastineau officially recorded 74 sacks in his 10 years with the Jets, not counting his first three years in the NFL when sacks were not an official statistic. He was a three-time first-team All-Pro and was selected to five straight Pro Bowls.

What Gastineau didn’t mention in his 30-minute radio interview was that he became a professional boxer after playing football. From 1991 to 1995, he fought a total of 17 professional bouts and won 15.

People close to Gastineau have been stating for years that they’ve noticed he occasionally slurs his words and loses his focus in conversations.

However, Gastineau stresses he has no regrets about playing football and encourages kids to play the game as long as they follow the proper techniques. The frequency of concussions among NFL players has in recent years sparked a controversial, heated debate over a form of brain trauma known as CTE (chronic traumatic encephalopathy), which is caused by repeated blows to the head.

“Do you remember Marvin Powell?” he said. “He was one of the best linemen in the NFL. He and I used to have wars [in practice]. … People would come and gather round because when we hit each other, I mean, you would hear pops, like a shotgun going off.”

Gastineau is the Jets’ all-time sack leader and he held the single-season NFL record (22) until 2001, when Michael Strahan broke it.

MEADOWLANDS – SEPTEMBER 18: Defensive end Mark Gastineau #99 of the New York Jets runs on the field during a game against the Houston Oilers on September 18, 1988 at Giants Stadium in the Meadowlands, East Rutherford, New Jersey. (Photo by Rick Stewart/Getty Images)