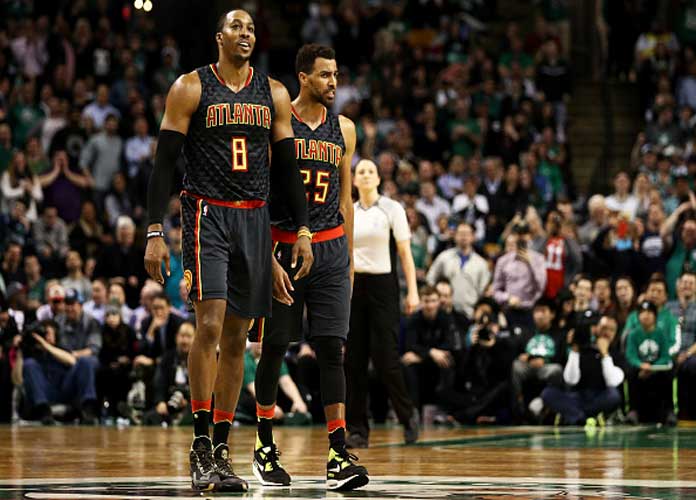 Given all the rumors surrounding potential big trades this NBA offseason, Dwight Howard decided to chat with fans on social media Tuesday night about their opinions on which major players they expect to be swapped.

Ok Twitter Fans ,, give me your thoughts , trades or otherwise & Remember 2B-Nice 🤗 pic.twitter.com/Nl6lQFVvBN

Less than ten minutes after the 31-year-old All-Star offered to answer fans’ questions on Twitter, ESPN’s Marc J. Spears revealed that the Atlanta Hawks were sending Howard to the Charlotte Hornets. However, Spears made a mistake by calling the Hornets by their old name, the Charlotte Bobcats. The team announced in 2013 that it would be changing its name beginning in the 2014-2015 season. Spears corrected his error in a separate tweet.

The Atlanta Hawks have agreed to trade center Dwight Howard to the Charlotte Bobcats, source tell ESPN’s The Undefeated.

Five minutes after Spears’ tweets, Howard answered the first question from a fan regarding the Indiana Pacers trading Paul George, saying it was difficult to name just one potential new destination for the All-Star.

He has so many great options, tough 2 Call https://t.co/fnC87lmFSS

At this point, Howard appeared to still be unaware that the Hawks — his hometown team — had traded him to the Hornets in a three-player deal.

As part of the swap, Atlanta will acquire Miles Plumlee, Marco Bellinelli and the 31st and 41st picks in Thursday’s NBA Draft. The Hawks already have the 19th pick in the first round of the 2017 Draft.

Not sure I’ve ever seen life come at somebody faster pic.twitter.com/aIuxoLzoZj

The Hornets will be Howard’s fifth team of his 13-year NBA career. The eight-time NBA All-Star was drafted first overall out of high school by the Orlando Magic in 2004, and spent eight years there before playing for the Los Angeles Lakers (2012-2013) and Houston Rockets (2013-2016).

“It is extremely important for our organization that we maintain our flexibility, and this trade helps us achieve that critical goal,” Hawks general manager Travis Schlenk said in a statement released by the team. “We appreciate the contributions that Dwight made on the court and in the greater Atlanta community this past season.”

Hornets GM Rich Cho said the team is excited to add “a player of Dwight’s stature.”

“He has been a very talented player, an elite rebounder and rim protector as well as a physical presence since the moment he entered the league,” Cho said in a statement.

The trade will save the Hawks salary-cap space.

The Hornets traded off their first-round draft pick in 2016 to acquire Belinelli after losing Courtney Lee and Jeremy Lin during free agency. Belinelli played in 74 games last season and averaged 10.5 points per game on 42.9 percent shooting.

“It was very difficult. I want to play,” Howard said at the end of the season. “I want to be on the floor. I want to make an impact. You can’t do it on the bench.”

The Hawks were eliminated in the first round of the postseason for the first time in three years. After the season ended, coach Mike Budenholzer resigned his additional role as president of basketball operations and Wes Wilcox stepped down as general manager.

BOSTON, MA – FEBRUARY 27: Dwight Howard #8 of the Atlanta Hawks is ejected from the game following his second technical foul against the Boston Celtics during the third quarter at TD Garden on February 27, 2017 in Boston, Massachusetts.