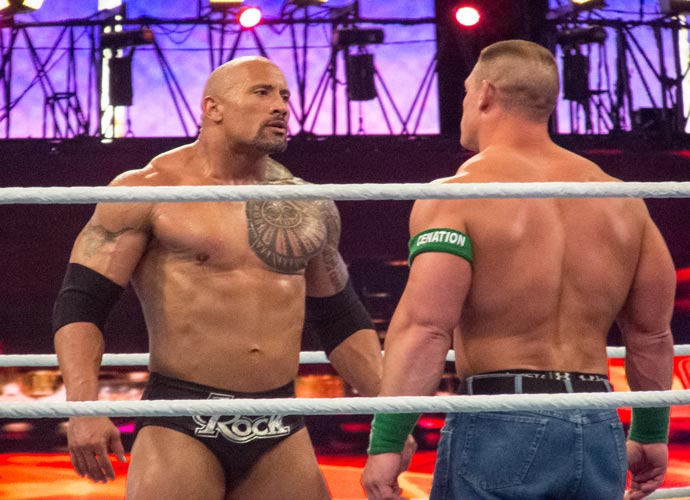 The Rock in the ring with John Cena by Simon

Dwayne ‘The Rock’ Johnson made a special appearance after Monday night’s “Raw” in Los Angeles ahead of WrestleMania to call a notable former WWE star on the phone.

The 44-year-old actor and former wrestler was at the Staples Center to shoot scenes from an upcoming movie about the life of WWE star Paige called “Fighting With My Family,” and decided to give fans an entertaining surprise. Johnson entered the ring and called former pro wrestler CM Punk– who famously left the company to sign with the WWE in December 2014– on his cellphone.

The Rock leaves CM Punk a voicemail after RAW goes off air. pic.twitter.com/UMZVPn6hVl

Punk, who lost his UFC debut fight in September, didn’t answer the phone, so Johnson left a voicemail. The 38-year-old former wrestler, who is looking for another UFC fight, later tweeted at the Staples Center to thanks all his fans, who began chanting Punk’s name in the packed arena upon Johnson’s call.

Thanks Los Angeles. Nice to hear from you. @STAPLESCenter

According to pro wrestling blog PWInsider.com, WWE executives were not pleased with the Rock’s stunt, probably because of the non-peaceful way the company and Punk parted ways.

Punk walked out of the company in January 2014, but didn’t technically part ways with the company until June of that year, when WWE fired him. Punk cited health reasons as an explanation for his exit from WWE.

Punk alleged WWE’s ringside doctor Chris Amann ignored a cyst on his back, which ended up being diagnosed by another doctor as a life-threatening MRSA infection. Amann responded by filing a $1 million libel lawsuit– which is ongoing– against Punk.