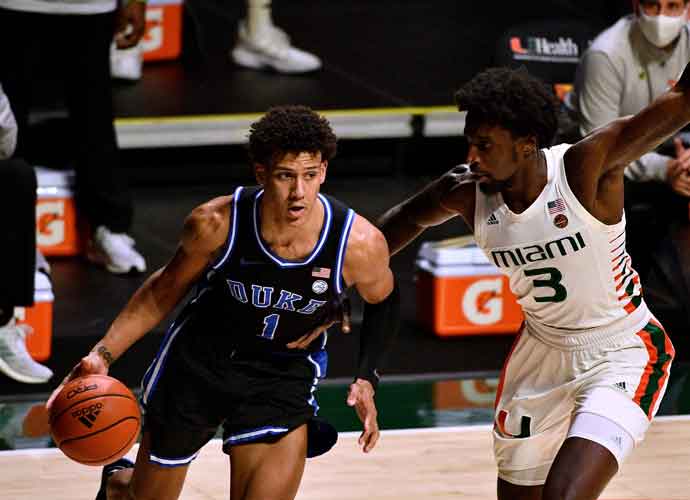 MIAMI, FLORIDA - FEBRUARY 01: Jalen Johnson #1 of the Duke Blue Devils drives to the basket against the Nysier Brooks #3 of the Miami Hurricanes during the first half at Watsco Center on February 01, 2021 in Miami, Florida. (Photo by Mark Brown/Getty Images)

Duke freshman and projected lottery pick Jalen Johnson is opting out of the rest of the college season and getting ready to declare for the NBA Draft.

An official press release from Duke confirmed that the forward would forgo the rest of the season to prepare for the NBA draft. “I appreciate everything about my time at Duke,” Johnson said in the press release. “My family, coach, and I have made the decision that I should not play the remainder of this season so I can be 100 percent healthy in preparation for the NBA Draft.”

Johnson played a great game during his college debut against Coppin State. In his first game with Duke, he posted 19 points, 19 rebounds and five assists. Two days after his debut game, he earned ACC Freshman of the Week honors for his debut performance. The young forward suffered a foot injury that sidelined him for three games. Once he returned, he was delegated to come off the bench and removed from the starting lineup. In the last three games, he came off the bench and played limited minutes. The forward only played a combined 23 minutes over the last two games. In his final game with the team, he scored just three points in eight minutes. In 13 games, Johnson averaged 11.2 points, 6.1 rebounds and 2.2 assists.