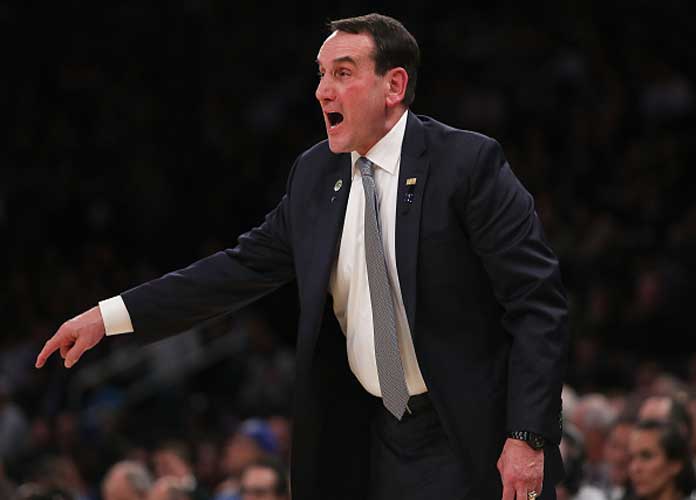 Duke coach Mike Krzyzewski, soon set to return to the Blue Devils’ sideline after undergoing back surgery earlier this month, informed players at a meeting Tuesday night they were banned from their own locker room and from wearing team apparel, sources told ESPN.

Sources also revealed to ESPN that Krzyzewski’s punishment– which he has used several times before– will last “until (players) start living up to the standards of the Duke program.”

After the meeting, the players held a separate players-only meeting, a source told ESPN.

“He needs to do more than just take away their jerseys,” added another source close to the program. “There are bigger issues that need to be addressed.”

Injuries to freshmen Jayson Tatum, Harry Giles and Marques Bolden kept them out for the beginning of the season, although the 15-5 Blue Devils squad has had other troubles that have placed Coach K in the spotlight. Veteran Amile Jefferson has also missed time due to injury.

Duke is 2-3 since Coach K underwent successful surgery on Jan. 6.

Monday’s 84-82 home loss to NC State was the third defeat in the past five games for the Blue Devils, who squandered a late lead in that game that led to Duke’s first home loss to the Wolfpack since 1995.

After a first half against Miami last Saturday in which Duke trailed by 11 points, acting coach Jeff Capel sat starters Luke Kennard, Allen and Giles. The team delivered a strong second half that led to a home victory.

The Blue Devils next visit Wake Forest on Saturday.

NEW YORK, NY – DECEMBER 06: Head coach Mike Krzyzewski of the Duke Blue Devils reacts against the Florida Gators in the second half during the Jimmy V Classic at Madison Square Garden on December 6, 2016 in New York City. (Photo by Michael Reaves/Getty Images)