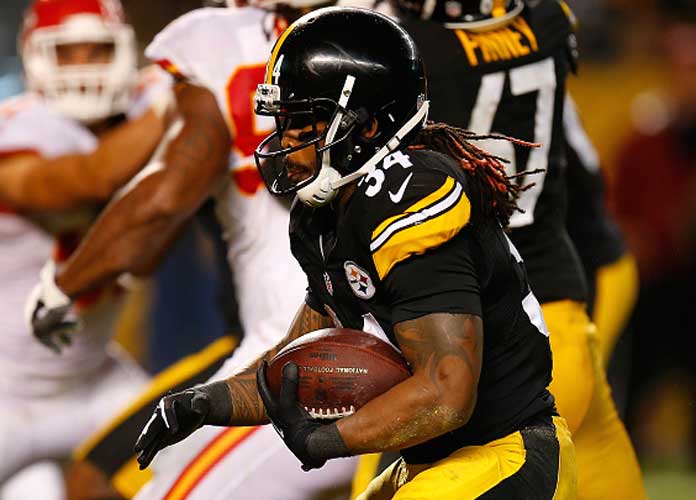 PITTSBURGH, PA - OCTOBER 02: DeAngelo Williams #34 of the Pittsburgh Steelers rushes for a two-yard touchdown in the fourth quarter during the game against the Kansas City Chiefs at Heinz Field on October 2, 2016 in Pittsburgh, Pennsylvania. (Photo by Justin K. Aller/Getty Images)

NFL running back DeAngelo Williams made his professional wrestling debut on Sunday at Impact Wrestling’s Slammiversary XV. He won in his first match.

The story laid out by Impact Wrestling, one of WWE’s main competitors, was that Quinn Ojinnaka, a former NFL player who now wrestles under the name ‘Moose’, had a problem with wrestlers Eli Drake and Chris Adonis and recruited Williams, a former Pittsburgh Steeler and Carolina Panther to help him out in the ring.

Having never wrestled in a professional match before, Williams looked decent. While the majority of his moves were limited to headlocks and arm drags he also enlisted a corner cannonball and frog splash.

Williams used the frog splash on Adonis, a former WWE wrestler, to win the match after Moose did most of the groundwork. The move was performed from the top rope and through a table.

Williams spent the 2016 NFL season as the primary back-up running back on Pittsburgh. He spent several weeks as the starter after Le’Veon Bell was suspended. For the first two weeks of the season, he led the league in rushing yards.

His contract expired in the offseason and many see his foray into wrestling as risky, when considering the potential for injury. His 2015 contract with the Steelers was worth $4 million but with his age and his wrestling career, it is unlikely many teams will be willing to sign him this offseason. Whether or not his appearance at Slammeversary was a one time thing is unknown.

The event, the first pay-per-view event in the 2017 Impact Wrestling schedule, lasted around two hours and consisted of nine total matches. In the main event, Alberto El Patron defeated Lashley and King Mo in the unification match for the Impact Wrestling World Heavyweight and GFW Global championships.