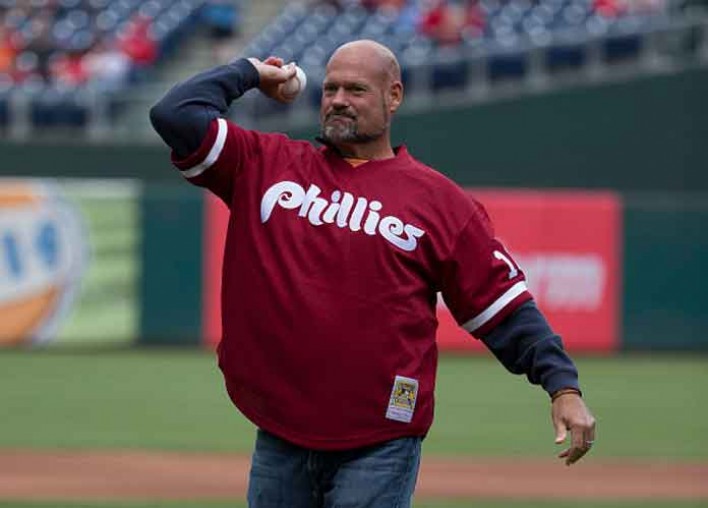 PHILADELPHIA, PA - MAY 15: Former catcher Darren Daulton throws out the first pitch prior to the game between the Cincinnati Reds and Philadelphia Phillies at Citizens Bank Park on May 15, 2016 in Philadelphia, Pennsylvania. The Reds defeated the Phillies 9-4. (Photo by Mitchell Leff/Getty Images)

Philadelphia Phillies legend Darren Daulton died on Sunday after a four-year battle with brain cancer. He was 55.

“Darren was a true leader of men,” Phillies chairman emeritus Bill Giles said in a statement. “The Phillies would not have gone to the 1993 World Series without his leadership. In addition to being an outstanding clubhouse leader, he was also a fighter. He battled through five knee operations to become an All-Star. I really enjoyed watching him for 14 years in uniform. Darren was a super human being. His teammates loved him. I loved him like he was one of my own. In fact, he called me ‘Uncle Bill.'”

Nicknamed “Dutch,” Daulton was drafted by the Phillies in 1980 and helped lead the team to a National League pennant in 1993, a year in which he also set single-season records for a catcher in walks (117), doubles (35), putouts (981) and double plays. He also made 143 starts at catcher that year, the most in Phillies history.

“We played hard and did everything hard. It was fun, and that was what made us special,” Daulton once said of the improbable ’93 team.

Tributes for Daulton poured in on social media on Monday from notable individuals and organizations from both the baseball world and from other sports leagues:

We will miss you, Dutch.

Loved watching this guy play as a kid. Played the game right. My Prayers are with your family. https://t.co/TypNmC5HCy

The Marlins organization wishes to express our deepest sympathy and sadness over the passing of 1997 World Champion Darren Daulton. https://t.co/2g284kM0bC

The Phillies announced that “Dutch” passed away today at 55 after a four-year battle with brain cancer.

Deeply saddened to hear about the loss of Darren Daulton today! You will be missed my friend, always enjoyed your presence at the ballpark

As a skinny 22-yr old rookie I hit Darren Daulton with a pitch & cringed at what might be coming next. Thankfully he showed mercy. #RIPDutch

R.I.P., Darren Daulton. A friend of my family when we lived in Arkansas City, Kan., and a helluva ballplayer. pic.twitter.com/rvBCt8rMaB

After four years of battling brain cancer, my dear friend and great teammate, Darren Daulton, has passed away…. https://t.co/w2MEd8yrdW

Even U.S. women’s national soccer team midfielder and Olympian Carli Lloyd — a suburban Philadelphia native — expressed her sorrow of the news and said Daulton inspired her to choose the #10 for her jersey.

So sad. My all time favorite. Why I chose #10 jersey. Thoughts and prayers go out to his family and loved ones. https://t.co/3BnS91rTuE

Daulton was a three-time All-Star during his 14-year stint with the Phillies (1983, 1985-1997), the longest tenure for a catcher in franchise history. In 1997, he was traded to the Florida Marlins, with whom he spent the last two and a half months of his baseball career. Then-Marlins manager Jim Leyland — who is currently in charge of the United Staes national baseball team — praised Daulton and cited his leadership in the clubhouse as a large reason for the Marlins’ World Series victory in 1997.

After that, Daulton was selected as the starting catcher on the All-Vet Team in 2003. He was inducted into the Phillies Wall of Fame in 2010, a year in which he also hosted the Philadelphia-based “Talking Baseball with Dutch” radio show on 97.5 The Fanatic.

Daulton was discovered to have two brain tumors in June 2013. The following month — after surgery to remove the tumors — he was diagnosed with glioblastoma, a highly malignant form of brain cancer. That same year, his foundation — the Darren Daulton Foundation (established in 2011) — dedicated itself to raising funds for brain cancer research and treatment. Daulton went into remission in 2015: he announced he was cancer-free in February of that year.

“All of us at the Phillies are saddened to hear of Darren’s passing. From the day that we drafted him until today, he constantly earned our respect and admiration as both a player and person,” said Phillies Chairman David Montgomery. “Darren was the face of our franchise in the early 1990’s.  Jim Fregosi asked so much of him as catcher, clean-up hitter and team leader.  He responded to all three challenges. One of my toughest decisions as team president was to approve his trade to the Marlins in July of 1997.  Our thoughts and prayers go out to his wife, Amanda, his parents, his brother and his four children. Dutch was truly ‘one of a kind’ and we will dearly miss him.”

Daulton is survived by his parents, a brother, his wife and four children. Funeral services for Daulton will be private.

PHILADELPHIA, PA – MAY 15: Former catcher Darren Daulton throws out the first pitch prior to the game between the Cincinnati Reds and Philadelphia Phillies at Citizens Bank Park on May 15, 2016 in Philadelphia, Pennsylvania. The Reds defeated the Phillies 9-4. (Photo by Mitchell Leff/Getty Images)