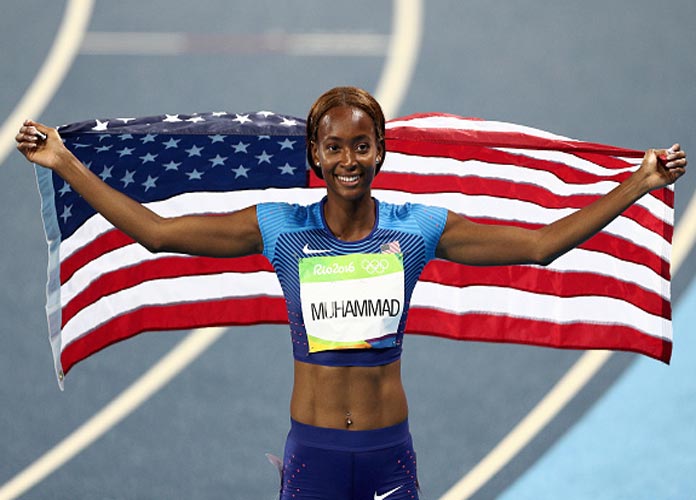 After two years of battling injuries and losing confidence over disappointing results, Dalilah Muhammad finally got her first-place finish, and simultaneously made history.

The 26-year-old became the first American woman to take gold in the 400-meter hurdles at the Rio Olympics on Thursday, finishing in a stunning 53.14 seconds.

After gaining an early lead, Muhammad–who competed collegiately at the University of Southern California– found herself all alone in the final 100 meters, crossing the finish line a comfortable .42 seconds over Denmark’s Sara Slott Petersen, who won silver.

Fellow American Ashley Spencer, who was far back early, won the bronze medal with a strong finishing kick while recording her personal best time of 53.72 seconds.

“It’s so exciting,” said Muhammad, a Queens, New York native. “This means so much; I’ve been working so hard for this. The last two years haven’t been the best but to finally be where I’m supposed to be at the right time, and I’m so happy about that.”

Her performance at the U.S. Olympic trials were a great predictor of her success at the Rio Games. Following a coaching change in February and an improvement of her fitness level, Muhammad posted the fastest time in the world this year and took nearly a second off her personal best.

“I just had to re-motivate myself to work harder,” she said. “I worked as hard as I ever did in this last year and being so much more disciplined played a huge factor.”

On Thursday, her game plan coming out of lane No. 3 was to reach the front as quickly as possible, and she delivered. By hurdle No. 8, she had opened up on the field and was only going to get caught if she made a mistake.

“I’m always trying to be the first one to the first hurdle,” Muhammad said. “I don’t really know what I was today but I caught the girl to my right fairly quickly, so once I did that I tried to even out with the rest of the race. I could tell I was in front but you never know in the 400 hurdles until you’re right at the finish. It wasn’t my (personal record), but I think it was a job well done.”

Spencer, who only began competing in hurdles full-time this year, admitted she made technical errors during the race and was probably not aggressive enough, since she lay back off the pace early, but added she was thrilled to win the bronze.

Meanwhile, Kerron Clement also secured a victory for Team USA on Thursday by winning his own gold medal in the men’s 400-meter hurdles.

“I knew I was going to get that gold medal, and I was sticking to that plan,” Clement said. “Nothing and no one was going to stop me from achieving that.”