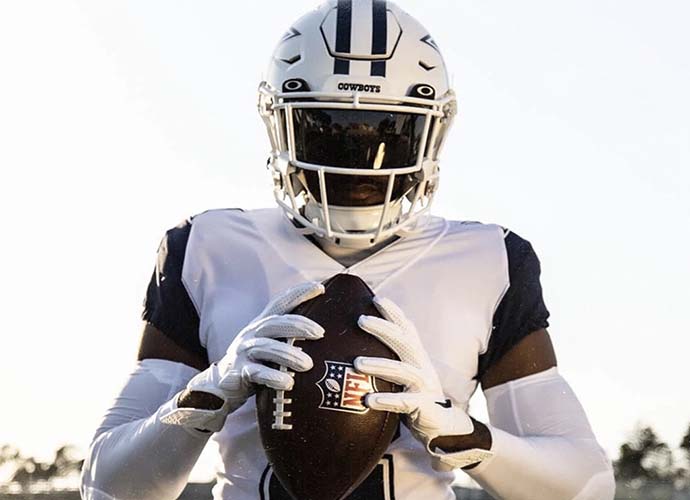 The Dallas Cowboys unveiled a new white helmet in their Thursday Night Football game against the Tennessee Titans. Combined with their Color Rush jersey, the uniform has been referred to as the “Arctic Cowboy” look. Dallas is the only NFL team to use two alternate helmets this season after unveiling a similar uniform on Thanksgiving.

⚠️ WARNING: these uniforms are so cold, they just might cause frostbite. 🥶🥶🥶

The Cowboys’ new “Arctic White” helmet is the first time the team has ever used a white face mask on a white helmet. The monochromatic look will pair with the team’s all-white Color Rush uniform, first worn by the team in 2015. The NFL’s Color Rush promotion formally ended in 2018, but the Cowboys have used the uniform many times since as an alternate.

The Titans will also wear their Color Rush uniforms, donning navy blue for their matchup with Dallas. They will enter the contest as heavy underdogs, as the team will again compete without quarterback Ryan Tannehill, who suffered an ankle injury in Week 15 against the Chargers. Backup quarterback Joshua Dobbs will start ahead of rookie Malik Willis.

With two weeks remaining in the regular season, the Cowboys have already clinched a spot in the playoffs and could still technically win the NFC East by winning out. The team defeated the Eagles last weekend to make this possible, but Philadelphia would also have to lose both of their remaining games, making this unlikely. Led by quarterback Dak Prescott and defensive star Micah Parsons, the Cowboys seem prepared to make a deep postseason run.

Meanwhile, with a 7-8 record, the Titans still have a chance to win the AFC South. They currently share the top spot with the Jaguars, who are favored to defeat the Houston Texans this weekend. Jacksonville and Tennessee will then face off in Week 18 in a game that will decide the division.