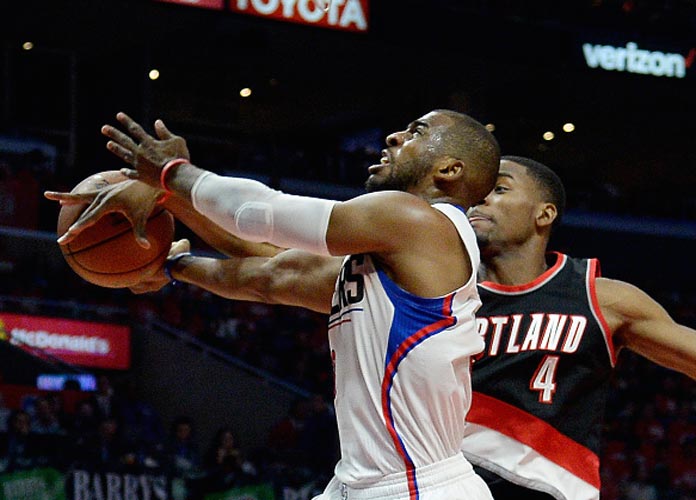 LOS ANGELES, CA - APRIL 17: Maurice Harkless #4 of the Portland Trail Blazers blocks a layup by Chris Paul #3 of the Los Angeles Clippers during the second half in Game One of the Western Conference Quarterfinals during the 2016 NBA Playoffs at Staples Center April 17, 2016, in Los Angeles, California. NOTE TO USER: User expressly acknowledges and agrees that, by downloading and or using the photograph, User is consenting to the terms and conditions of the Getty Images License Agreement. (Photo by Kevork Djansezian/Getty Images)

The Los Angeles Clippers rolled past the Portland Trail Blazers 115-95 at their own Staples Center on Sunday to take a 1-0 lead in their best-of-seven opening round series.

Clippers stars Chris Paul, Blake Griffin, DeAndre Jordan and J.J. Redick led a 26-8 run to crush the Blazers and cap the opening weekend of the postseason in the Western Conference.

Just two weeks after returning from a three-month layoff due to a pair of injuries and a suspension, Griffin looked more than healthy to help lead the Clippers offense. He attacked Portland starters Al-Farouq Aminu and Maurice Harkless right off the bat, getting himself to the rim and the free-throw line to score some shots.

Paul led the Clippers with a game-high 28 points, 11 assists and six rebounds, and Griffin scored 19 points–his most since Dec. 19 10 of which came in the first eight minutes and six of which came on loud dunks. Griffin also added 12 rebounds and six assists. The Clippers are 6-0 with Griffin in the lineup since his comeback.

“It felt good. It felt really good,” said Griffin, who said he’s “pretty close to how I want to feel,” during his postgame press conference. “Our offense was really clicking. I thought we were doing the things that we wanted to do. That helps, when you’re getting easy shots. I got some right at the basket early, so that helps.”

Jordan added 18 points and 12 rebounds. The Clippers didn’t make a single 3 in the first half and took only two, finishing 6-for-17 from deep.

Paul and Jordan, however, also led the Clippers defense to hold the Blazers to just 39.8 percent shooting.

“Dame’s a handful. He’s got the pull-up, he’s got the drive, he’s got all that, along with C.J. McCollum,” Paul said of Portland guard Damian Lillard. “But when you got, to us, the Defensive Player of the Year in D.J., and then you got Blake back there, too, it makes it that much easier, knowing that you can crowd them sometimes and you’re sending them into those shot-blockers.”

Lillard led the Blazers with 21 points, while McCollum was held to nine points. They combined to average 45.9 points this season, third-highest by any duo in the NBA.

The Clippers outscored Portland 30-13 over both halves to lead 65-48 in the third. Midway through the second quarter, Paul scored 12 of the Clippers’ last 15 points to give them a 50-42 lead at the break. Griffin dominated in the first quarter with a 16-7 run that gave the Clippers an eight-point lead, their largest of the first half. He scored eight points, including a one-handed dunk after knocking down Lillard and drawing a foul from Mason Plumlee on his way to the basket.

“He was explosive,” Clippers coach Doc Rivers said of Griffin. “Blake got himself going through the flow of what we were doing. Today was the first day he had great timing.”

Many people began leaving the stands after the Clippers led by 18 points with 3:14 left in the game.

Game 2 is Wednesday night at the Staples Center.

LOS ANGELES, CA – APRIL 17: Maurice Harkless #4 of the Portland Trail Blazers blocks a layup by Chris Paul #3 of the Los Angeles Clippers during the second half in Game One of the Western Conference Quarterfinals during the 2016 NBA Playoffs at Staples Center April 17, 2016, in Los Angeles, California.