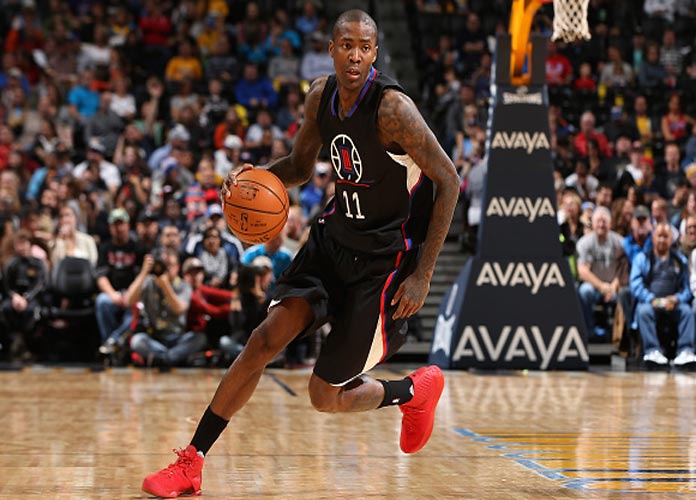 DENVER, CO - NOVEMBER 24: Jamal Crawford #11 of the Los Angeles Clippers controls the ball against the Denver Nuggets at Pepsi Center on November 24, 2015 in Denver, Colorado. The Clippers defeated the Nuggets 111-94.

To be eligible for the award, players have to have come off the bench in more games than they started. Crawford had 51 first-place votes and 341 points from 130 sportswriters and broadcasters from both the United States and Canada. Golden State Warriors shooting guard Andre Iguodala finished second with 288 points, and Oklahoma City Thunder Center Enes Kanter (182 point) came in third.

Crawford, 36, is also the oldest player to win the award, and averaged 14.2 points and 2.3 assists in 79 games this season, coming off the bench in 74 of those games. He also ranked second in the league in free throw percentage (90.4).

Crawford previously won the award in 2009-10 (with the Hawks) and 2013-14 (with the Clippers) and is the only player to win with multiple teams. Detlef Schrempf, Ricky Pierce and Kevin McHale all won the award twice.

“I’ve never made an All-Star Game, but I’ve always had my peers’ and coaches’ respect around the league,” Crawford stated at a news conference. “So for me, at the end of the day, 10 years from now, 15 years from now, I’ll just wonder, ‘Will the new fan remember me? Will they remember what I did in the game?’

Crawford was the Clippers’ third-leading scorer, with 15.6 points per game during a 45-game stretch without Blake Griffin in the lineup. For the entire season, Crawford scored more points in the fourth quarter (341) than any other Clippers player.

“Hopefully, it is in a positive nature, and hopefully, this is one of those things for the kids that are coming up that are 9 or 10 years old to say, ‘Hey, I don’t have to start. I can still have an impact on the bench,'” Crawford added. “Obviously, starting is the cool thing, and everybody wants to do it. Hopefully, this can inspire a new generation of players.”

DENVER, CO – NOVEMBER 24: Jamal Crawford #11 of the Los Angeles Clippers controls the ball against the Denver Nuggets at Pepsi Center on November 24, 2015 in Denver, Colorado. The Clippers defeated the Nuggets 111-94.