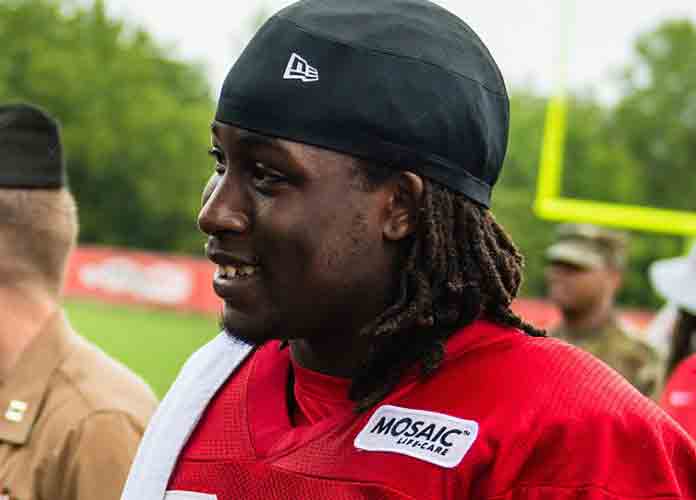 In December, Hunt was immediately released by the Kansas City Chiefs after a video surfaced of the running back kicking and shoving a woman in a hotel last February. Hunt was not arrested or charged for the incident. However, he was placed on the Commissioners Exempt List by the NFL shortly after there was major public backlash to the video. He’s still not eligible to play and the NFL must complete its investigation into the incident before a decision about discipline can be made.

Current Browns general manager John Dorsey drafted Hunt, an Ohio native, in 2017 when he was with the Kansas City Chiefs’ front office.

“My relationship and interaction with Kareem since 2016 in college was an important part of this decision making process but we then did extensive due diligence with many individuals, including clinical professionals, to have a better understanding of the person he is today and whether it was prudent to sign him,” Dorsey said in a statement.

“There were two important factors: one is that Kareem took full responsibility for his egregious actions and showed true remorse and secondly, just as importantly, he is undergoing and is committed to necessary professional treatment and a plan that has been clearly laid out.”

Hunt apologized to his victim, the Chiefs organization and his family following his release in December. He again apologized in the Browns’ statement on Monday.

“First off, I would like to once again apologize for my actions last year. What I did was wrong and inexcusable. That is not the man I was raised to be, and I’ve learned a great deal from that experience and certainly should have been more truthful about it after the fact. I’m extremely grateful that John Dorsey, Dee and Jimmy Haslam and the Cleveland Browns organization are granting me the opportunity to earn their trust and represent their organization in the best way possible on and off the field,” he said.

“I am committed to following the necessary steps to learn and to be a better and healthier person from this situation. I also understand the expectations that the Browns have clearly laid out and that I have to earn my way back to the NFL. I’m a work in progress as a person, but I’m committed to taking advantage of the support systems that I have in place to become the best and healthier version of myself.”

NFL Network Insider Ian Rapoport explained Monday that the Browns signed Hunt despite his multiple incidents of misconduct — the last of which placed him on NFL Commissioner Roger Goodell‘s Exempt List — because they intended to do so before the league finished its investigation into his latest incident. Rapoport explained that Hunt’s group of agents and other representatives were “on the clock” to find him a new team to play for. Rapoport said the Chicago Bears were among the many teams who expressed interest in the running back. Goodell announced ahead of the Super Bowl this month that the probe into Hunt was nearly completed.

This may be the most confusing move of the offseason. On the field, Hunt is a talented back but he’s mostly benefitted from the amount of attention the ridiculous talents around him drew. Josh Gordon was an All-Pro wide receiver on a desolate Browns team. Yet Cleveland sold him off for pennies on the dollar along with a seventh-round pick in September to the New England Patriots in exchange for a fifth-rounder. The Browns gave up on a talented player because of some suspension issues. Meanwhile, they’re willing to give up valuable cap space to a player indefinitely suspended who hasn’t played in a year or without Andy Reid as his coach.

On a more serious note, the move is complete hypocrisy. If the Browns’ logic was that everyone deserves more than one chance, how could they move on from Gordon but bring in Hunt? Gordon was suspended for alcohol and marijuana abuse due to mental health issues. He hurt no one other than himself. Hunt, on the other hand, beat a defenseless woman even as others held him back. One of these issues is much more serious than the other. Hunt promised to be a “healthier version” of himself after going through alcohol and anger management counseling and becoming a “better and healthier person.” I can only hope he is. Regardless of Hunt’s rehab as an individual, this move does not reflect positively on the Browns or their standards for players. Free agent Colin Kaepernick‘s fans must be screaming angrily into the void yet again at the latest news involving Hunt, and it’s hard to blame them.