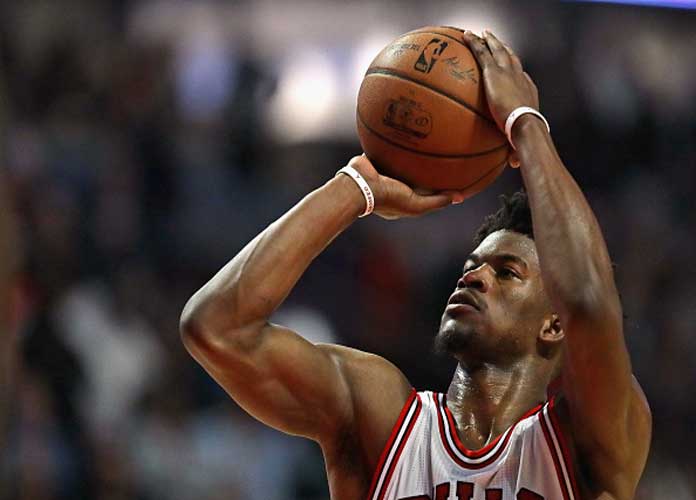 CHICAGO, IL - JANUARY 02: Jimmy Butler #21 of the Chicago Bulls shoots a free-throw against the Charlotte Hornets at the United Center on January 2, 2017 in Chicago, Illinois. The Bulls defeated the Hornets 118-111.

The event will come 32 years after former Bulls star Michael Jordan jumped from the Chicago Stadium foul line in one of the most unforgettable slam dunk contests in NBA history.

Next year’s All-Star Game is set to be held at Los Angeles’ Staples Center, while the 2019 event will be held in Charlotte. The 2017 All-Star Game was moved from Charlotte to New Orleans due to controversy surrounding North Carolina’s anti-LGBT bathroom bill. Charlotte earned the hosting bid for 2019 in May after parts of the controversial legislation were repealed.

Chicago Mayor Rahm Emanuel has been aggressive in landing premier sporting events, including the NFL draft in 2015 and 2016, last June’s NHL draft and next year’s NBA draft lottery.

“They would have to force me to take the All-Star Game,” Bulls Chairman Jerry Reinsdorf told former Chicago Tribune reporter and ESPN.com’s Melissa Isaacson in 2012. “They take over the building. Your season-ticket holders have to be in a lottery to see if they get tickets and then they don’t get a good ticket. Really, no good can come out of it and all it can do is upset your fans.”

CHICAGO, IL – JANUARY 02: Jimmy Butler #21 of the Chicago Bulls shoots a free-throw against the Charlotte Hornets at the United Center on January 2, 2017 in Chicago, Illinois. The Bulls defeated the Hornets 118-111.