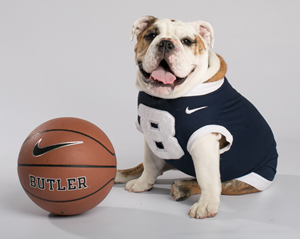 The Butler Bulldogs’ live mascot, Butler Blue III, is used to some big stages. After all, Butler men’s basketball’s made it to two NCAA Final Fours in the past six seasons, even if it came just before his reign as mascot. He may have been a little bit nervous last night at the Big East Tournament at Madison Square Garden, though.

But don’t worry for Blue, Michael Kaltenmark, his owner and handler, says. “The throwing up is not from him being sick. It’s from sheer excitement. He got too worked up and popped.” Kaltenmark added that this was Blue’s first accident in his three years on the job.

The excitement was well worth it, too, as Butler and Xaiver fought in an overtime battle that was eventually won by Xaiver 67-61. Although Butler lost, they are ranked #21 in the country and should be in very good position to have a favorable seed in this year’s NCAA Tournament.

As for Blue, he’ll make the most of his time with some new friends this weekend in New York City before heading to the “Big Dance” with Butler next week.