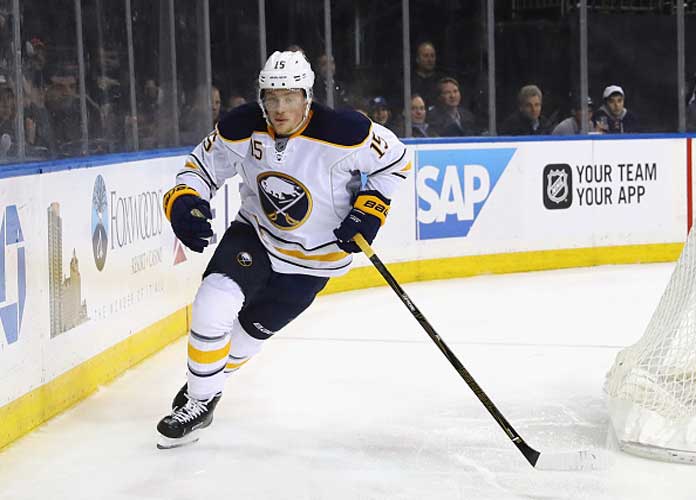 The Buffalo Sabres’ season couldn’t get much worse at this point, yet somehow they continue to receive bad news. Sabres captain Jack Eichel will miss the remainder of the NHL season due to a herniated disc in his neck. The team announced the injury on Wednesday, but did add that Eichel is “expected to be healthy and ready to play at the beginning of the 2021-22 season.”

The captain has been sidelined since March 7 and the Sabres were forced to endure an 18-game losing streak, the longest in the salary-cap era. They finally snapped that winless streak against Philadelphia, but it’s hard to imagine that going through that wasn’t embarrassing for the players. The team fired head coach Ralph Krueger, but things haven’t gotten much better since the change in coaching staff.

Buffalo’s chances of making the playoffs are basically nonexistent. The team is currently 10-25-7 with 27 points. They are in last place in the MassMutual East Division, and aren’t even remotely within striking distance.

The Sabres also went into sell-mode ahead of Monday’s trade deadline, shipping off some of their best players including Taylor Hall, Brandon Montour and Eric Staal. While Buffalo did receive some draft picks and somewhat valuable assets for these veteran players, it may be a few years before the Sabres are competitive again. They are about to miss the playoffs for the 10th consecutive year.

In 24 games this season, the 24-year-old Eichel produced 18 points (two goals and 16 assists). He has just gotten hot prior to going down with the injury, as he was on a four-game point streak before being forced to miss time. Interim coach Don Granato had told ESPN earlier this month that he was “hopeful” Eichel would eventually return this season. It appears the coach was wrong about that prediction.

“I had Jack in the U.S. program when he was 16,” Granato told ESPN. “I got to know him then, and I thought the world of him then. It’s something I’m excited to be a part of when he’s back — because we expect him back, we’re hopeful he’ll be back before the end of the year — and I look forward to that, now in the position of head coach.

“He means a lot to me personally. I love the fact that he has such strong and visible emotions of the game. I’ve reminded him numerous times that he’s got to make sure he finds the fun in all of this, too. Sometimes a lot of these great athletes are so intense, and there’s so much demand on them that they feel like they can’t have fun. It becomes such a business. They’re judged on different levels. I’m speaking generally now, but when you lose that, or you stop being aware of that, it becomes even harder.”

The Sabres will need to nail their draft picks and make some otherworldly offseason moves if they intend on moving in the right direction next year. At least they will have their captain back though.